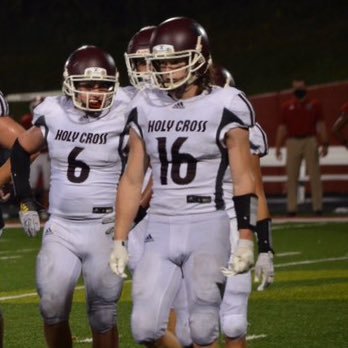 Holy Cross in Louisville is a football powerhouse. They happen to play in the 1A classification, but there isn’t much to be drawn from that.

We have before discussed this many times. Kentucky high school football has both good and bad teams spanning all 6 of its classifications. Size of enrollment means very little in Kentucky regarding the quality of its football programs.

Mayfield (2A), Pikeville (1A), Beechwood (2A), Belfry (3); you see teams like this on the Fall schedule you better buckle them up tight mister. You’re in for a rough ride.

Holy Cross beat Class 6A, Louisville Southern, by 36 points last year. They beat Class 4A, Moore, by 37. The Cougars opened the season with a win over Class 4A, Holmes, 19-6.

Yeah, they’re just 1A. Keep thinking that. We’ll see how much fun your squad has on the bus ride home.

You know a team, like Holy Cross, is winning outside its classification often when it goes 7-2, in a pandemic-shortened season, and still leads the 1A classification in RPI. Last season, Holy Cross’s RPI was .69983.

The Crusaders were looking pretty good out of the gate in 2020 until one of its “big guns” went down in its third game. The Cougars were playing Providence (Clarksville), IN on September 26, 2020 when potential catastrophe struck.

Trailing 14-0, Providence had cut the Cougars lead in half with 5:15 left in the third quarter going into the end-zone to score its first touchdown of the night. Nathan, a.k.a. “Nate,” Siegrist suffered a lower leg injury during the resulting PAT and had to leave the field in the back of an ambulance.

Play was halted for a half-hour with the score now 14-7. Holy Cross seemed rattled.

The offense went three and out on its next possession. The Pioneers from Indiana then took the ball 75-yards in 5-plays to tie the game at 14. It was late in the 3rd-Quarter.

Things were not going well. That may well have been an understatement to Cougars fans.

Holy Cross’s fine senior, and someone we have before featured, Chaz Geraghty, took control. The Cougars pulled out a 35-28 victory.

The good news, the Cougars had won. The devastating news…Siegrist was lost for the year.

Our picking Siegrist as a “break through star” for the upcoming Fall isn’t much of a stretch. Siegrist, who plays DE/WR (or has principally been utilized there so far in his high school career), had quite a sophomore campaign over his 13-games played in 2019. As a sophomore, Nate had 51-tackles, 4-TFLs, and 2-interceptions as he was primarily a defensive guy.

He only played 3-games in 2020, but it appeared clear Nate was going to be utilized more offensively had he been able to continue his junior season. In the three games of action he did see, Siegrist caught 9-passes for 130-yards and a score. He had 8-tackles, 1 forced fumble, and 2 fumbles recovered on defense.

We at KPGFootball, having studied the situation, believe Nate Siegrist is poised for a “break-out season” in 2021. We also believe he will be showing up on quite a few recruiting radars as we continue to move along into the Fall.