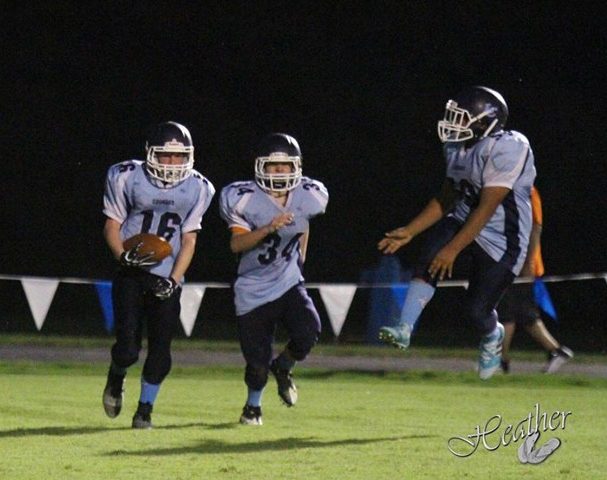 Talk about your upsets! Talk about a victory no one could possibly have seen coming! Logan County Middle School’s 7th grade football team, which entered the playoffs 4-4 but having won 3 of its last four games, went into Franklin, Kentucky last night and shocked the Commonwealth with a 22-6 win over number 2 seeded, Franklin-Simpson. Now, by virtue of 7th seeded Henderson North deciding they didn’t want any of the surging Cougars either, Logan County is on to the Regional Semi-finals and a date with the winner of Edmondson Co. vs. McCracken Co. most likely.

Among the chief contributors to the Cougars’ offensive success against the Wildcats from Franklin-Simpson was Harper Butler (No. 16). Butler rushed for 105 yards on the night and scored 2 rushing TDs. Further demonstrating his versatility, Butler also contributed 38 receiving yards and an interception from his post in the defensive secondary. Certainly no big surprise to Cougar faithful, but Logan County got another big-time performance from QB, Davin Yates. Yates, whose brother (Zach) is also a star football player on the high school’s undefeated and highly ranked football team, contributed 110 yards rushing from his QB post, scoring both a touchdown and 2, critical, 2-point conversions. Among the top defensive contributors were Brady Hinton, who contributed both a tackle for a loss in a key situation and 42 rushing yards, and Kiege Shoemake, who had four tackles for a loss. Felix Fernandez had a QB sack for the Cougars to combine with a really big hit on the opposing QB which mated perfectly with his 3 tackles for loss.

After last night’s win, together with Henderson North’s forfeit, the Cougars await an opponent in the Regional Semis with a present record of 6 wins against 4 losses. The Cougars also find themselves riding a 5 wins in its last 6 games surge. We will have to wait and see what other surprises are in store for this team which appears to have gotten hot at the right time. It should be fun seeing how far the Cougars can ride the present momentum. Perhaps, they can ride it all the way to Lexington, Kentucky and a 7th grade State Football Championship. Good luck Cougars, from your friends at KPGFootball. Just know we’ll be cheering for you!