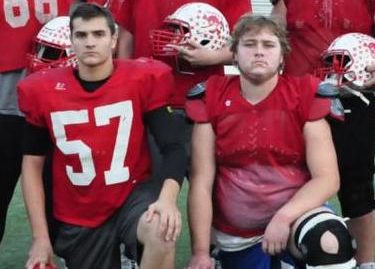 There is quite a controversy brewing in the mountains about whom will be starting for Coach Phillip Haywood‘s Pirates at the split tackle position upfront. Who’s going to be the fifth, first-teamer on Haywood’s Hawgs? Well, we have been informed, through sources close to the situation which KPGFootball has developed to enable it’s cutting edge anlaysis and reporting, that it is a two-man race, with a potential third candidate, Justin Barker, at 6-3, 215 pounds being able to man the position too if he isn’t deployed at tight-end. We are going to assume Barker will be at tight-end and break-down the other two candidates. Who’s it going to be…Logan Arbogast or Sean Cochran?

First we will discuss what the split-tackle does in the Belfry offense. The split-tackle is the guy who has 2nd level blocking responsibility over just blocking a first-level defensive lineman. The split-tackle gets matched up against smaller, quicker linebackers a lot of the time so it requires a lineman for whom the team has to be willing to sacrifice some size and bulk for quickness and speed. Both of these candidates fit the bill. Logan Arbogast (Arbo), who will be a senior (Class of 2019) stands 6-2 and weighs in between 215 and 220 pounds. Arbo is quick, with good speed and agility, and is known for having a nasty disposition. Arbo is always looking for a linebacker to punk out so, with him around, the best advice we can give opposing 2nd level defenders is…it would be wise for you to have your head on a swivel. Arbo could be coming from anywhere, at any time. Don’t get too comfortable. We believe Arbo to be the most likely starter at split-tackle based on information we have developed.

The other candidate is Sean Cochran who is a rising junior (Class of 2020) and someone about whom practice viewers have raved. He is the slightly smaller of the two candidates, standing 6-0 tall and weighing in at 220 pounds. Cochran is quick, though not quite as quick as the other competitor and Cochran has good speed but maybe a step slower than Arbogast. What Cochran has in abundance and every bit as much as Arbogast is, when he does arrive, he’s going to do something to the intended target which will be both mean and unpleasant to experience. There are very few programs who can boast they have five legitimate offensive linemen to man the offensive front. For most places, the team has maybe three and then two slots for which the team has to account. Belfry has 7 linemen, up front, any one of whom would be the best offensive lineman on the roster a lot of places. That’s quite a luxury.