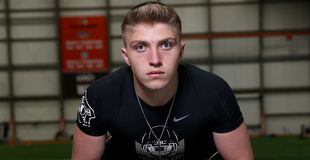 If we are being honest at KPGFootball, and we strive diligently to be honest in our evaluations, our admiration for Devin Johnson has more to do with the Paintsville, Kentucky native’s being a football player than what kind of prospect he is. By the way, he is obviously, with the interest he is drawing, one Hell of a prospect in football, but we focus on people who can play the game. There are those of you out there consumed with star ratings, frame, measurables, and the like; and all of that is well and good. However, at some point in an athlete’s career…he can either lace them up, strap it on, and get down on a football field or not. At some point, he has to go from being an athlete to being a football player. I went to high school with one of western-Kentucky’s, all-time athletes, in Lamont Leaper Ware. Ware had the athleticism, speed, quickness, and bounce to have won the MVP of any Rivals camp, or similar combine, any time he wanted. I mean for running speed, vertical leaping ability, frame, broad jump, forty speed, and spacial quickness he was off the charts. He played both college, Division I, basketball and professionally, for many years, in Europe. Never played a single down of football after middle school. Probably would have been great at it, was great in basketball, but just wasn’t a football player. Johnson Central’s Devin Johnson is a football player…and a champion wrestler too.

Devin, who we selected last season to our AFI-KPG Sophomore All-State Football team, is now measuring (according to numerous recruiting publications) 6-1 and weighs in at 210 pounds. This is ideal size at the position he plays on defense, which is OLB. Now, Devin Johnson is an accomplished running back, having gained 756 yards last season in 104 carries with 12 rushing TDs. Most recruiters agree, and our selectors agreed as our selecting him a linebacker would certainly denote, that Devin’s future is on the defensive side of the ball at the college level. On Defense for Johnson Central, Devin tallied 90 tackles and recovered a fumble for a Johnson Central team who has played in the State Title game, in Class 4A, for three years running; winning it all during Devin’s freshman year of 2016. Devin has a registered 40 yard dash time of 4.78, a pro-agility shuttle of 4.27, and squats 465 pounds which certainly explains his having sufficient pound per square inch strike force with the ground to generate such speed and quickness. Devin has plenty of punch, separation, and shedding strength as he has a maximum bench press recorded at 310 pounds and reps the high school bench press repetition weight (185 pounds) 20 times. Devin Johnson is also a kid whose body of academic work, thus far in his scholastic career, would indicate that both his being cleared by the NCAA to enroll as a freshman student-athlete and the school’s concern about his impact on its APR (Academic Progress Rate) are both matters about which the University will not have to fret. Devin carries a 3.5 grade point at Johnson Central High School.

Morehead has already offered the Class of 2020 linebacker (Good job Moorehead for jumping on this one early) and Devin is also drawing interest from both UK and Marshall. There will be lots of schools wondering how to get to Paintsville, Kentucky before this one is over. Devin Johnson was an easy selection to our All-State team this past season because Devin Johnson is a football player. We take pride in knowing one when we see one.