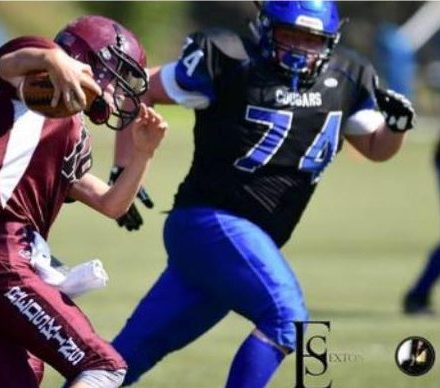 I am sure Coach Junior Matthews looks at the talent at his middle school and is willing to bet help for his varsity football team is on the horizon. Coach Matthews knows there are better days ahead for his Cougars at Letcher Central High School. I mean, with the Class 5A, District 8 team going winless, last season; it obviously can’t get any worse. There is plenty of reason for optimism though as I have always believed teams are built from the lines of scrimmage outward. Lines of scrimmage aside, two of the top three ground gainers return in running back Hunter Campbell, who is a rising Junior, and QB, Nick Sergent, who will be back for his junior year. In addition to his being in the top three rushers from his QB position, he also threw for 1,967 yards and 16 aerial scores over his junior campaign. The defense is also returning its top tackler in Jonathan Sergent who tallied 113 stops a season ago. That’s a whole lot of production returning. I will tell you this, there won’t be two more ballyhooed rising 8th grade linemen in Kentucky than Whitesburg’s Peyton and Mason Sayers. If I were a betting man, my bet would be Coach Matthews would bring them both up early, if the KHSAA would permit it. I am quite sure he can’t wait for them to get to him. I know I would feel that way if it were I.

Now Letcher Central Middle School has been very formidable in the past. In 2014, the Cougars advanced to the State Semifinals of the KYMSFA State Championships. Many around Kentucky think the team will have that kind of talent again this coming season and may make a similar run, especially with the Sayers twins on board. There aren’t many areas around the Commonwealth of Kentucky where football people are unfamiliar with the Sayers twins. Both Peyton and Mason are so good it is unfair to feature them together. I mean our writing about twins in the same article certainly isn’t very original of us. I am sure it happens to them all the time. However, having one lineman, either on defense or offense, as big, agile, and mobile as either of the Sayers twins is a once-in-a-career occurrence for most middle school coaches.

Taylor County had one in Logan Parker, John T. Austin had one in Octavius Oxendine, Hopkinsville Middle School had one in William Long. What would any of the three programs have been able to accomplish had they only had two. I know three programs which would have been pleased to have had the luxury of discovery. With a middle school program boasting this kind of line of scrimmage size, Coach Matthews has to be anxious to get these boys in a high school weight program and on up to the Cougars’ varsity as fast as possible. These boys are huge. They are not fat. There is a big difference between the two of those concepts! Most middle school linemen this size are fat. What they are…is movable size and movable strength with huge hands and feet. They are two problems for which middle school opponents will lack a solution. Both Sayers twins starred, as sixth graders, on Kentucky’s 7th grade Future Stars Team last year and have played FBU football for the other Team Kentucky too.

We were able to catch up with the Director of Kentucky Future Stars’ football after one of the Future Stars combines. Ricco Hughes had this to say about the Sayers twins…The 7th grade was highlighted by the tone setting aggressiveness of returning OL/DL brothers, Peyton and Mason Sayers. Those guys’ experience helped the entire group step up their efforts and intensity! One of the first things which defines a football star is his ability to make his team better for his having been on the roster. Peyton and Mason’s abilities to make an entire team step up both its effort and intensity, in the end and irrespective of their enormity, is what makes them Team Kentuckians! This is why they are truly football stars.