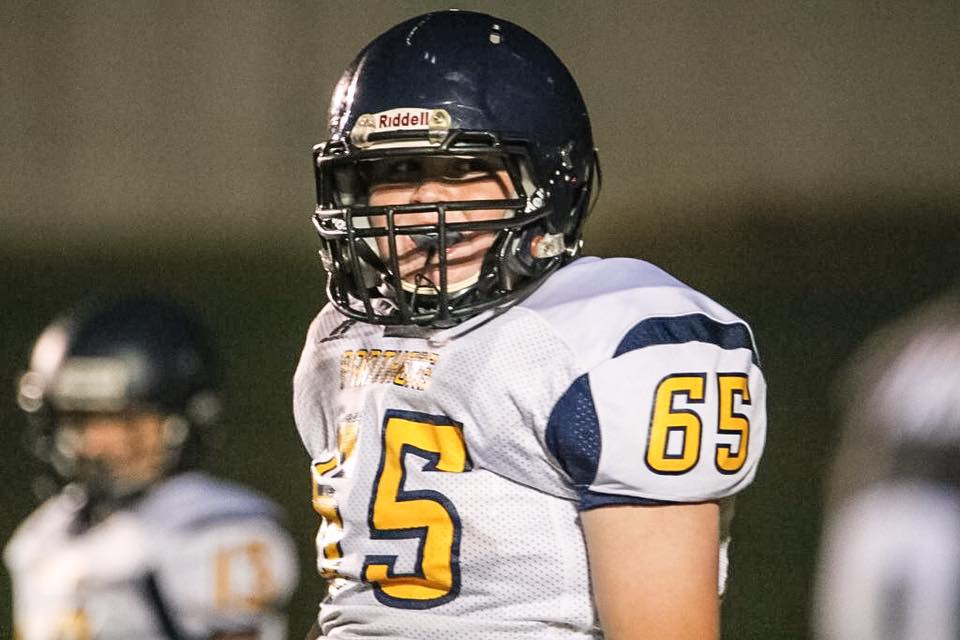 Writer Taylor Hall, writing for theodysseyonline.com, wrote an article entitled People Are Like Flowers: They Can Bloom Beautifully. In that article she went on to say that… [s]ometimes the ones that take the longest to bloom end up being the most beautiful or strongest. In talking with Bracken Castle’s dad, Sam, he thinks the amount of time it is taking his 6-2 inch, 235 pound, offensive lineman (center) to develop is going to net him quite a blossom eventually. We agree completely. Bracken Castle is young and has accomplished all he has in football while being a late bloomer. When he does come into the full flower of manhood, there is no telling how large of an individual this will end up being.

Sam Castle, Bracken’s father, is 6-5 in height himself. When Bracken and he stand chest to chest, Bracken’s reach is a minimum of three inches longer than his father’s. That would place his length, a very prized physical characteristic for any FBS coach searching for FBS caliber offensive lineman, in the 6-8 range. I believe that would make most O-Line coaches exclaim…Oh Baby! There’s another plus about Bracken’s being a late developer. Aside from the fact he isn’t close to the apex of his eventual size, what he has done as a football player, gaining selection for both Team Kentucky Future Stars and Team Kentucky FBU, he has accomplished by honing his technique, playing with low pad-level, exhibiting quick-burst get-off, exhibiting both active hands (hand violence), and a strong punch instead of just bullying his way around the football field like players who develop too early.

Bracken has begun working with a trainer named Chaz Martin and, though the two haven’t worked together very long, the results are already impressive for someone in 7th grade. Bracken is bench pressing 150 pounds, squatting over 200 pounds, and power cleaning 150 pounds. Bad news for young men who will have to line up across from Bracken in the future…his strength levels are only going to exponentially increase as he continues to develop from a pre-pubescent into the full flower of manhood with grown man muscles. If I am on the 7th grade Team Tennessee Future Stars which will take the field this summer at Georgetown College, I am praying Martin doesn’t get Bracken Castle there too fast. Bracken plays Center along the Knox County Middle School’s front and, on defense, is a Tackle. Bracken has entirely played on teams running out of the Spread utilizing the Pistol formation which means Bracken is an accomplished shotgun snapper of the football, something which has frustrated previous Team Kentuckys in prior years.

We here at KPGFootball are excited about Bracken Castle and what his future in football holds for the Kentucky football family, both this summer against Tennessee and in years to come. We also predict, as he continues to mature, get stronger, and fill out his lengthy frame, you will see Castle move over to play left tackle one day soon. One thing is for sure, with his being a Straight A student and an active member of both his church and Kentucky Youth Assembly, together with his frame, budding strength, and athleticism, this is a kid who will be getting courted by a ton of Universities looking for offensive linemen. That day, my friends, is on the not too distant horizon.