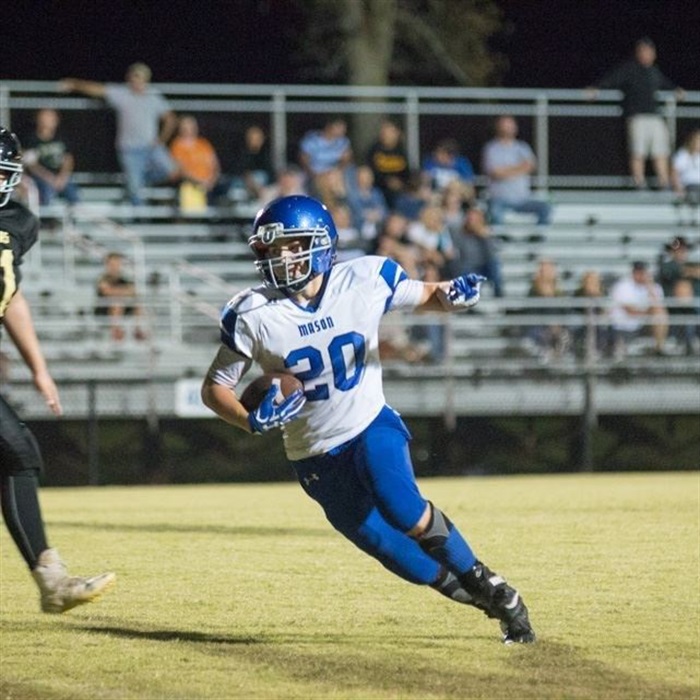 Let me see, it’s like this developing storyline seems eerily familiar. I wonder what would happen if Team Kentucky, this summer at Georgetown College, should turn the ballgame over, in the fourth quarter, to a bruising runner who also doubles at linebacker? Interesting…I wonder, what would be the likely result? It’s like I am experiencing some sort of déjà vu. Wait a minute! I think I know the answer…win the game 17-14, perhaps? Aside from having a bit of fun here, what I am suggesting to the coaching staff of Team Kentucky, which is something of which they are even more aware than I, is the fact that, last year, with the game on the line, we gave the football in the fourth quarter to one of Kentucky’s best linebackers in the Class of 2021 (Austin Gough, Owensboro). He then proceeded to jam it right down the throat of the Tennessee defense and into the end-zone for glory. Victory Kentucky! Well, should Kentucky be faced with that or a similar storyline this summer, we have a candidate on this year’s roster to be our 4th Quarter Gough. The RB/FB/MLB combo-star in the class of 2022…Mason County’s Brandon Dearing (Hudl Highlights).

Dearing, who is 5-10 and weighs 175 pounds, is making his second consecutive soirée into the Tennessee-Kentucky Future Stars’ Classic, and is no stranger to playing football on either the State or National stage. Dearing runs the 40 yard dash in 5.13 seconds, giving him plenty of separation speed once he gets past the first level. This speed works in tandem with a build which punishes tacklers he may encounter at the line of scrimmage hoping to thwart his advance into the 2nd and 3rd levels. Brandon is a player with the athleticism to produce at a variety of positions. Last year, for Team Kentucky, he played fullback. At Mason County Middle School, he played both RB and LB. He is already listed on Mason County High School’s varsity roster, for 2018, as a running back and has been assigned the number 8 (he wore No. 20 in middle school).

The fact Dearing played middle linebacker in middle school makes him, to me at least, particularly in-DEARING to play in the offensive backfield. I like running backs who attack first-level defenders with the attitude and ferocity of a middle-linebacker attacking a ball-carrier in the hole. It was one of my favorite things about Austin Gough’s game, the benefits of which were on full display in last year’s Classic for everyone to see. Gough’s down-hill, grueling, hard-nosed, battering-ram, running style in that 4th quarter led Kentucky to victory and him to being awarded Offensive MVP.

Of course, Dearing, in doubling as a fullback/middle linebacker also attacks a line of scrimmage similar to one of the most famous players to ever combo at those two positions in high school, Larry Csonka. The Csonka you probably best remember settled at fullback playing for Syracuse and made both the College and NFL Halls of Fame as a fullback. It was the aggressiveness he developed early, playing MLB in high school, which became a trademark of his running style thereafter. I talk with college recruiters all the time. I will let you in on a little secret…they aren’t very amused (or impressed) with prep runners who give ground, hoping to gain ground. They are much more impressed with guys who leave their shake and baking at the linebacker level and burst through the first level like their rears are on fire. They want to see you attack the line of scrimmage, not divert the running play outside like a frightened child running to the safety of his mother’s embrace over on the sideline.

Brandon Dearing is a guy whose game, running the football, looks like his game at MLB. Whole lot of down-hill, whole-lot of north/south, little to no East-West, and NO REVERSE. In the end, should we win this game for a third consecutive time this summer against Tennessee; it will be because of the spirit of our charge and not the speed of our retreat. Run over the line of scrimmage defenders, don’t attempt to wow them or us watching with some flailing attempt to flank the defense. You are entering a level of football where very few have the speed to pull that off, and to everyone other than your own parents, it looks cowardly. Football isn’t a coward’s game.