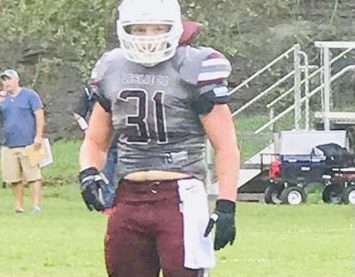 There was a guy who just recently, on BlueGrassRivals, caused quite a stir ranking different position groups. He ranked the top 30 offensive linemen. We may not have agreed with the order but he seemed to hit all the same thirty we would have ranked had we taken on the task. He then ranked the top 20 defensive linemen. Again, we differ in the order but the 20 or so he listed could, easily, make a compelling case for inclusion. Then, he listed the top 25 linebackers. While the order would have been different had it been KPGFootball, and not some random poster on BGR (BluegrassRivals), he appears to know something about Kentucky, high school, football, as all of the kids he named could make a compelling case for inclusion.

There was a particular kid, Preston Spurlock, he listed at number 25 among the LBs, and, by the way, the poster on BGR goes by the handle Boyle County, and KPGFootball couldn’t agree more. In fact we believe him to be considerably higher among his position than the 25th best linebacker in all of Kentucky, high school football. He made our Freshman, All-State Football team a year ago. If his sophomore campaign should mirror the production of his freshman effort, he’s a strong candidate for our sophomore team.

Now Spurlock is a player with whom KPGFootball is pretty familiar. Of all the kids we met, traveling around the FBU, Team Kentucky, circuit, Spurlock is definitely one of our favorites. In fact, as early as April 2, 2017, KPGFootball published an article entitled Preston Spurlock…Leslie County’s Tough Man! We said in that article, and reiterate today, that there are just kids who look the part.  At KPGFootball, we don’t know if it is the scowl on Preston Spurlock’s face, his Mohawk, or his penchant for contact but if you were to draw a defensive football player you might even draw his picture.

Preston has played nothing but MLB for much of his football life, and at 5’10” and 215 pounds, he is built for it, and he has the hips and explosion for it.  He plays with really good pad level, sinks his hips well, and plays with his head up, shoulders back and chest proud. Some have questioned his straight-line speed, spacial quickness, and coverage skills. He’s only going to get both faster and quicker as he matures and continues to train. However, he is tailor made to patrol from tackle to tackle. KPGFootball has never heard anyone question whether Preston can fill, pursue, and tackle the cut-back in space?  Can he make a drop and cover the TE or Slot slanting or curling into the middle zone?  Can he cover the back on the middle screen out of the backfield?  Can Preston close out on outside running plays consistently?  Well, that is why Preston has worked hard on his body and speed to demonstrate more phases to his game than playing the run. Judging from his growing, state-wide, reputation, he’s proving something to someone.

Now, last season as only a freshman, Preston’s high school didn’t report its numbers to the KHSAA, so KPGFootball had to call on one of Preston’s coaches, in Leslie County, to be provided the information contained in this article and on which he was selected All-State a year ago. Spurlock had 123 solo tackles for the Class 2A, District 8 team, and, according to one of the coaches consulted, Preston registered a whopping 37 tackles for loss together with an interception and a caused fumble. While Preston may not have the frame or length of a Gough or Thompson, no one can question his toughness, desire, metal, nor on-field production. The kid is strong, explosive, powerful, heady, and an absolute joy to coach. Spurlock hits like a ton of bricks, an attribute commonly produced in Kentucky’s coal country, and, in the mind of KPGFootball does that make him one of Kentucky’s top 25 high school linebackers? Well, we think so!