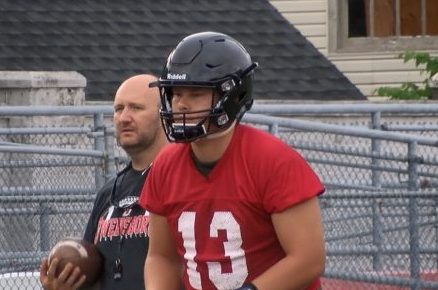 As we continue to feature prominent match-ups occurring in week zero across the Commonwealth of Kentucky, and as we march toward the 2018 season opener; today, we have the Madisonville-North Hopkins Maroons, from the 4A classification, versus Class 5A, Owensboro (Senior) High School, Red Devils. Madisonville has appeared in some preseason polls as a top ten football team, in 2018, in its classification and Owensboro has been ranked, preseason, by (pretty much) everyone. The game will be played in Owensboro, Kentucky. Here’s a break down of that match-up and, at the end, the KPGFootball opinion as to whom will win Friday night!

For the visiting Maroons…

Jay Burgett’s Maroons were 7-5 a season ago and featured a ground based attack which produced a 900 plus yard ground gainer in Aaron Miller and a 1,500 plus yard rusher in All-Stater, Jeriah Hightower. The problem is the Maroons couldn’t throw it enough to scare any of its better competition into unstacking the box. Last year, the Maroons only threw the ball for 696 yards in its 12 games and only 9 TDs versus 5 interceptions. Several quality linemen return in All-Staters, Blake Moody and Jordan Vaughn, to go along with quality rising sophomores like Drew Fleener. The Maroons thought they were going to get a transfer at QB (Drew Skinner) to upgrade its passing attack but it appears the KHSAA didn’t go for it and Skinner has returned to Webster County where he isn’t expected to play football this year. While this scenario isn’t for what Burgett would have wished, he still has Hayden Reynolds returning, who was effective at times last year, though not consistently, but whom is a really quality athlete. We have heard the Maroons may be short handed along its offensive front on Friday night as two of its offensive linemen may not be healed up enough to go in the opener. KPGFootball has also been advised through its sources that Aaron Miller will play against OHS, but may not be 100%. Madisonville North-Hopkins was 7-5 a year ago and all of their super sophomores have become juniors.   Madisonville opened at home. against Owensboro, in 2017 and got absolutely hammered, 41-19.

For the home-standing Red Devils…

Well, the Red Devils were forced to start a true freshman at linebacker a year ago and he responded with over 90 tackles, making the freshman All-State Football team, being nominated for the MaxPreps Freshman All-American team, and was awarded the Homers Radio Newcomer of the Year Award at the season’s conclusion. Austin Gough will be back at his linebacker post, in 2018, a year older, stronger, faster, quicker, bigger and more explosive. Let that sink in…what a nightmare for opponents. The Red Devils also return one of the fastest players in Kentucky High School Football in All-Stater Imonte Owsley, the best Nose in Western Kentucky, in Diamond Glover, and another top linebacker, who is a junior this year, in Trace Grenier. Of course, the problem for the Red Devils in 2017, a year in which they finished a very uncharacteristic 4-7, was the inability to throw the football. The Red Devils have looked much better in the passing game this preseason, and much more balanced offensively, with transfer Will Warren at the helm of its offense. Warren transferred from Owensboro Catholic, where he lost his starting spot to Drew Hartz after falling prey to injury, and the 6-2 and 231 pound, pro-style QB, has looked absolutely fabulous for the Red Devils in its two scrimmages. In its most recent scrimmage, which was a simulated football game, Owensboro beat Warren East 35-7. Owensboro has been ranked, this preseason, by almost all publications in the top-10 in Kentucky’s 5A Classification. The coach’s had the Red Devils at No. 9, KPGFootball had them in its top 5. We believe, as the season unfolds, you will discover you need to listen more to us and less to them as we study this area daily and the coach’s are too busy getting their teams ready for the season to know too much about anyone else’s ball club.

Watch the match up of the Maroon running backs (Miller and Hightower) against the Red Devil’s first two levels of defense, particularly Glover at Nose with both Grenier and Gough positioned behind him at linebacker. If the Red Devils shut down the Maroon running backs, who will be running behind a line missing two first-team players but which still have both Vaughn and Moody, Madisonville North-Hopkins has not shown it can beat teams through the air. On the flip side, Moody and Vaughn, both two way players, will have to contain Imonte Owsley and, now, Ezekeil Brown. Brown is no longer at QB but has been repositioned in a backfield which would still seek to benefit from his elusiveness and speed, just as a RB instead of a QB. We have also learned Austin Gough will get some looks at fullback where his speed, size, power, and explosion make him a difficult match-up to defensively counter. Remember, Gough is no stranger to carrying the football, though he didn’t do it last season. Gough, in middle school, was one of Kentucky’s premier backs and was Offensive MVP of the Tennessee-Kentucky Future Stars game in 2016. Another important matchup will pit Will Warren against a North-Hopkins’ secondary which doesn’t get many repetitions defending the forward pass playing in practice against the offense. I know the “scout team” will be running the Red Devil attack this week against its secondary, to give it a look, but North-Hopkins doesn’t have someone to simulate what Will Warren has to bring to the table. If it did, he would be the first string QB for the Maroons.

This one doesn’t seem like too difficult of a call, at least not to KPGFootball. Quite frankly, the only thing the Maroons can do offensively, Owensboro Senior is perfectly suited to stop cold. Owensboro, on the other hand, has added, this offseason, offensive weaponry it lacked a year ago. Check the stats, Madisonville North-Hopkins struggles playing teams it can’t bully across the line of scrimmage and linebackers who can get down hill in the run game. This one will be an Owensboro blow-out.