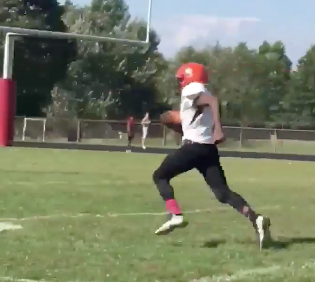 Well, it wasn’t A Tale of Two Cities Saturday in Hopkinsville, Kentucky but it turned out to be a Tale of Two Teams and they are headed in decidedly different directions, at least for now. Hopkinsville Middle School continued its red-hot play, behind four scores in which Daisjaun Mercer factored, at the very least, significantly. Meanwhile, the Colonels of Christian County Middle School, which came out the gate on fire this year, including beating the Tigers 30-0 in late August, fizzled out Saturday, ending its season on a two-game Schneid. The Colonels, after coming out of the gate 6-0, lost its rematch against the Tigers in the season’s last game, 14-8, before one and done-ing the KYMSFA playoffs with its 28-18 defeat at the hands of the Region I, Division I, 5th-seeded, McCracken County Middle Mustangs.

As for the Tigers, Hopkinsville Middle School entered the playoffs a 6th seed in Region I’s 2nd Division. That proved to be a very unfortunate seeding for the 3rd seeded Wildcats of Franklin-Simpson Middle School as the Tigers may have been either the best or, if not the best; certainly the hottest 6th seed in the entire KYMSFA playoff bracket. In spite of the overall feeling All-State candidate Jacob Beale could have played better (which seemed to be the chorus on FaceBook after the game. For the record, KPGFootball thought Beale played well, but, what do we know?), the Tigers still dispatched the Wildcats from Franklin, Kentucky with little to no trouble. Good teams overcome a player’s (perceived) subpar performance. That ability is what makes the team a good team. The data suggests these Tigers, sitting at 6-3 entering the game this weekend in Elizabethtown, Kentucky against mighty TK Stone Middle School, is, in fact, a good team.

On the day, Mercer, who rushed for 201 yards on 14 carries with three rushing TDs and who also threw a completion for one of the two, 2-point conversions, was greatly assisted by a fine day running the football from tailback, Jaron Mills. Mills, in only 9 carries, still gained 95 yards against the Wildcats and tallied a rushing TD himself, which together with Mercer, accounted for virtually all of HMS’ scores. In its game with Franklin-Simpson, the Tigers scored four TDs and converted half of its 2-pt conversion attempts (2 for 4) for its 28 points. Defensively, Coach Robert Stinson’s charges limited the Wildcats to one score on the day coupled with a conversion of its two-point attempt to make the final score 28-8. The night cap, which would pit Christian County Middle School (CCMS), a Division I, 4 seed, against the 5th seeded McCracken County Middle would end differently, and the difference would be quite vast.

First of all, Christian County Middle School’s losing 28-18 to McCracken County Middle Saturday night ruined what was a really gutsy performance by its 7th grade QB, Joshuah Keith, and some really hard running and fine defense played by a player who played, just last year, at McCracken Middle, JT Adams. As both Adams (2023) and Keith (2024) are top-ranked football talents in their respective classes, and with Team Kentucky season together with the East vs. West All-State Middle School Classic, All-American games, and the Tennessee vs. Kentucky Future Stars game all forthcoming, Saturdays’ game is a long way from the last football either of them will play this year.

McCracken in winning the game by 10 points, housed two kick-offs after scores for 14 points which would prove to be the winning margin. You have often heard us write on KPGFootball that you don’t kick the ball deep in Middle School. Time and again, the Colonels elected to disregard that principle and kick the ball to McCracken’s kick returner only to find the kick-off team just couldn’t tackle the Mustangs’ best athlete in open space. Think bout this for one second…the Colonels only scored three TDs which weren’t vacated by penalty. Two of those three times, the Mustangs housed the ensuing kick-off for six points. Guess what? The Mustangs really housed all three but the third was was nullified by a block in the back call which occurred well behind the play and didn’t factor in the play’s being successful.

So, at least for one week, the Tigers move on and the Colonels go home. We really can’t stress this enough but had you seen each of these two teams open this season, you would have never guessed it would be the Tigers, and not the Colonels, advancing to play in its Regional semi-finals. Congratulations, Tigers! There are 16 teams still in contention for a State Football Championship in the KYMSFA’s 2nd Division and you are one of them. The sledding gets really tough from here as TK Stone has been at least as far as the State semi-finals three straight years; winning it all just two years ago. Can the Tigers advance past E-Town? Can they get to Lexington? KPGFootball wouldn’t have thought this 30 days ago, but we would now say this team, peaking at this time, could do just about anything.