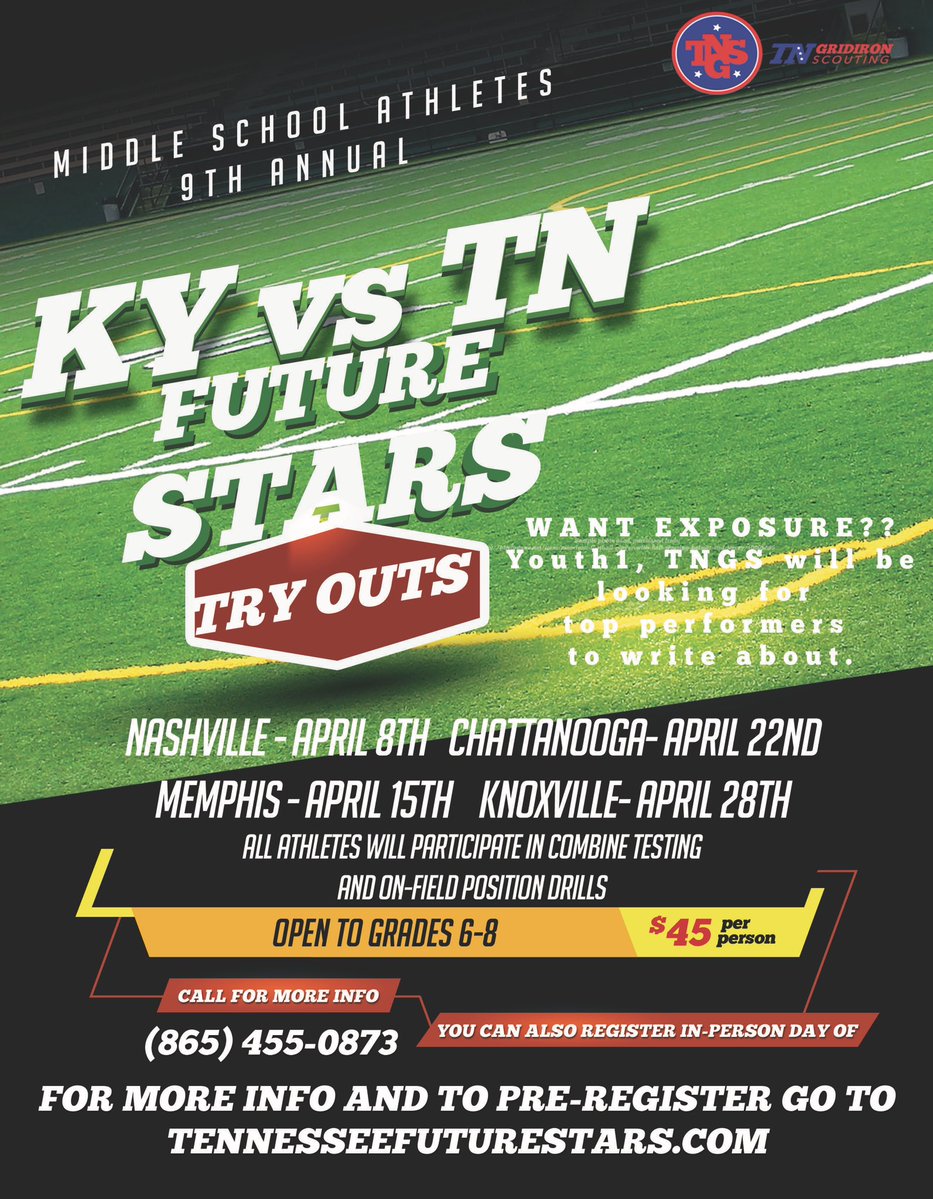 In a move sure to expand our reach and continue to build our brand, KPGFootball has been requested by TN Gridiron Scouting to be its boots on the ground tomorrow at the Tennessee Future Stars combine. TN Gridiron Scouting been around much longer than we, and having a much wider appeal, made our decision to accept this assignment elementary my dear Watson, with apologies to Sherlock Holmes. Therefore, I am pleased to announce that I will be at the Nashville Christian School located on 7555 Sawyer Brown Road in Nashville Tennessee for tomorrow’s combine. My present information is that the 6th and 7th grade check-in is between 12:30-1:00 p.m., CST, with the combine to follow. The 8th graders check-in between 1:00-1:30 p.m., CST, with its combine immediately following.

We will be at Nashville Christian tomorrow evaluating prospects and combine performances and will be tweeting video from the combine. Follow us on Twitter @KPGFootball for video straight from the action. In addition, after the combine is complete we will publish an article with analysis of stand-out performances to be published to TN Gridiron Scout and Kentucky Prep Gridiron. Naturally, we will be in Bowling Green, Kentucky the following week for the Western Kentucky Future Stars combine. This will be the second year KPGFootball has had the privilege of covering this fantastic series and the first year we have been honored to get to cover both sides of the state line.

To the credit of some high school coaches, in both Tennessee and Kentucky, the message of the impact a top-flight, rising, ninth grader can have on his varsity program is starting to resonate. Both the Tennessee and Kentucky Future Stars programs have propelled its participants onto immediate HS, varsity stardom and opportunities to play in college following HS. Because of Future Stars, and programs like it, players entering 9th grade are coming to high school both faster and stronger than at any previous time I can remember.

One memorable Tennessee Future Star I will never forget is now at the Webb School in Knoxville. A couple years ago Webb started this Future Star as an 8th grader at RB. His name was (and still is) Elijah Howard. Elijah ran a 10.4, laser timed, 100 meter at Tennessee’s Tom Black Track before he ever entered high school. He also won 4 National FBU, 100 meter, sprint championships before enrolling in high school. How did he do as an 8th grader playing varsity football at the Webb School? He gained 1,055 yards on only 99 carries for a per rush average of approximately 10.656 yards every carry. He also caught 15 passes for 442 yards and scored 18 total TDs, as an 8th grader. They weren’t playing a parade of patsies either, playing Alcoa, Oak Ridge, CAK and BGA out of Nashville, among others.

My colleague and friend, Carlos Younger, just wrote an article about five 2021 players, all five of whom are former Tennessee Future Stars, who should be closely monitored going forward around the Knoxville/East Tennessee area this next high school season. I am providing a link to the article and recommend you read it. The point is simply this, there is time in every young athlete’s life for him to toe the line and measure his ability against the best. Young athletes learn a lot from this experience whether the initial discovery is good or bad, and I might add an initial result which is other than you would have hoped is far from fatal. Let the measurements either teach the competitor he is on the right track or let it illuminate what, if anything, his play may be presently lacking as he develops toward being the best football player his God-given talents permit. A perfect time to analyze top-flight, mid-state, middle-school football talent is tomorrow. I can’t wait for the talent to show me what they’ve got.

This is Fletcher Long reporting as a special correspondent for TN Gridiron Scouting and for Kentucky Prep Gridiron reminding you to PLAY THROUGH THE WHISTLE!