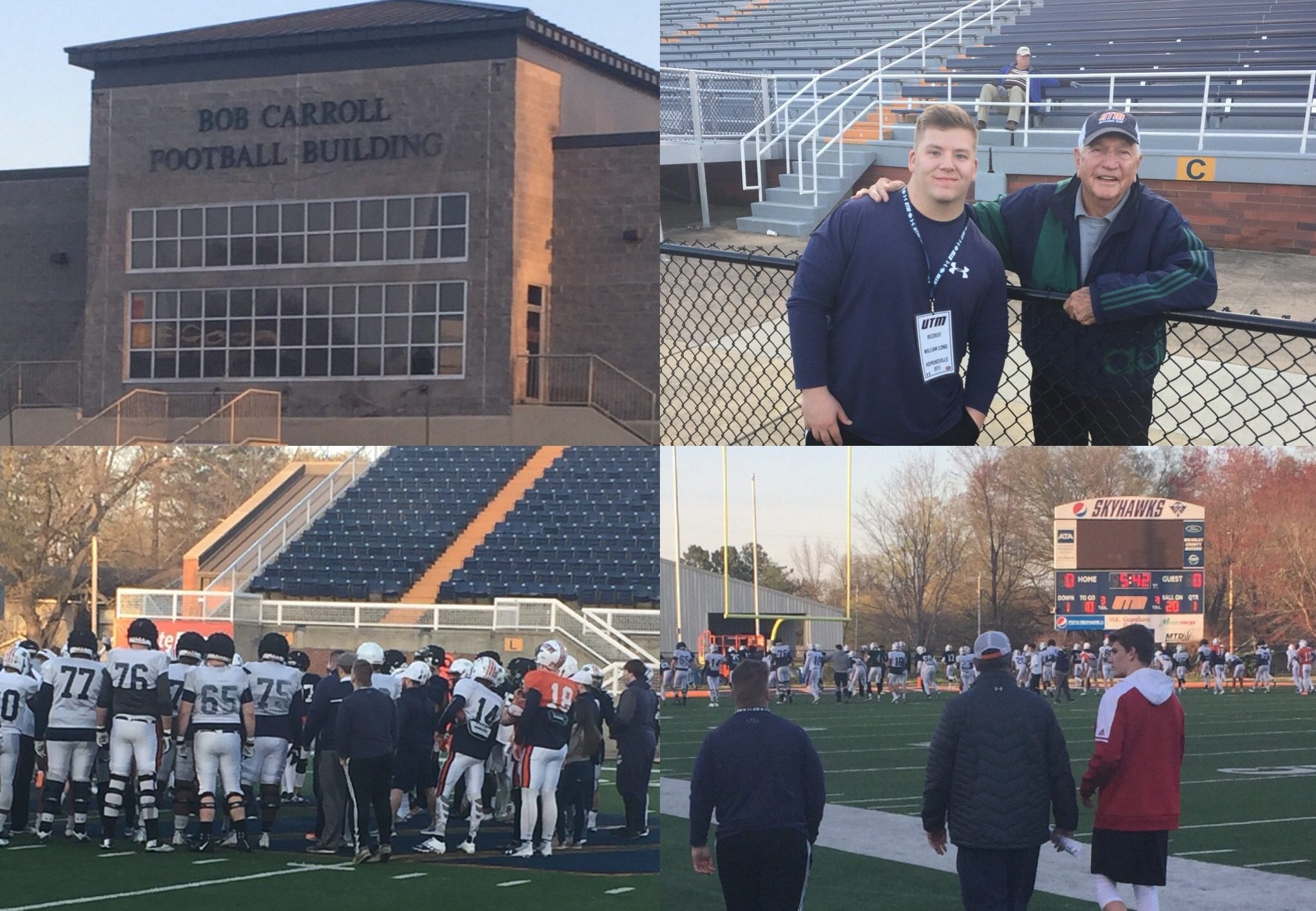 Hopkinsville High School freshman footballer and reigning Kentucky State Powerlifting Champion in the 250 pound weight class, William Long, got the opportunity to take in a Spring Practice scrimmage with the University of Tennessee, Martin, SkyHawks and came away really impressed. William was invited up by HC Jason Simpson and got a tour of the first class facilities by recruiting coordinator and Assistant Football Coach, Brian Polizzi. Catching up with the young freshman football player, we were able to sit down with him (facilitated by our living under the same roof) to learn from him what, about the SkyHawk football program, really stood apart.

Well, everyone was exceedingly gracious and very friendly, said William, but I suppose what stood out to me the most was how highly regarded the coaching staff was by the players. I was asking for their impressions kind of on the down low and everything they had to say about both the school and program was really positive. We asked William if there was a player who really stood out and he said, Yeah, I really enjoyed hanging on the sideline with Deashun Fields and Chris Jackson is a Kentuckian, like me, so it was great seeing him too. When asked where the coaches indicated he might be utilized should he end up at UTMartin, he told me the talk was of him as a fullback, offensively, or along the defensive front, depending on how he develops going forward.

Probably a moment the significance of which may have escaped the AFI-KPG Freshman All-Stater, with his being just a freshman in HS and all, was his getting to meet Mr. UT Martin Football, Coach Bob Carroll (pictured to the left). Coach Carroll is the winningest coach in UT Martin football history with 85 coaching victories (Jason Simpson’s 78-59 present mark is closing fast). Carroll guided the program for 18 years (1957-1984). Coach Carroll coached the 1967 team to a 10-1 worksheet and birth in the program’s only bowl appearance. Carroll’s team won the Tangerine Bowl over West Chester State 25-6. As a player, Coach Carroll, himself an Academic All-American at the University of Wyoming, guided the Cowboys to a victory over Texas Tech in the Sun Bowl. Coach Carroll played quarterback/runningback for the school which would become UTMartin before matriculating, as the school was a Jr. College in those days, to the University of Wyoming where he would play QB. There was a poignant moment when I looked at William and said, You do know with whom you just took a picture, right? When he looked at me, I pointed up to the Football complex named for him and said, that guy. William was unmistakably impressed.

We got to see the team go through individual drills and some position skill work and then the team went live scrimmage, offense versus defense. The speed of the scrimmage was impressive as were the licks being laid out on the field. One thing appeared obvious to me, a team which topped the OVC, last season, in scoring defense, permitting only 14.3 points per game over 11 games, will be very good on that side of the ball again this upcoming season. One of the players told William and me on the sideline during the scrimmage, Our defense is cold! I would have to agree with that. Before concluding, it was also nice to see Ty Simpson, Class of 2022, who is a QB whom Coach Harbaugh and the University of Michigan has already offered. Ty played for me this past December at the Bret Cooper Junior All-American game in Dallas, Texas and William, himself a former Bret Cooper All-American met him tagging along with me at this past year’s event. The two of them have grown to be friends and appeared to enjoy catching up with the other.

I asked William, for the purpose of this article, to give me two adjectives he felt encompassed his exit impressions of UT Martin and its football program. The two adjectives he gave me were impressive and family. When I asked for him to expound on those adjectives, he said the speed at which they play the game and the overall pace of practice was impressive and the team just felt like family. This is Fletcher Long reporting for Kentucky Prep Gridiron reminding you to PLAY THROUGH THE WHISTLE!