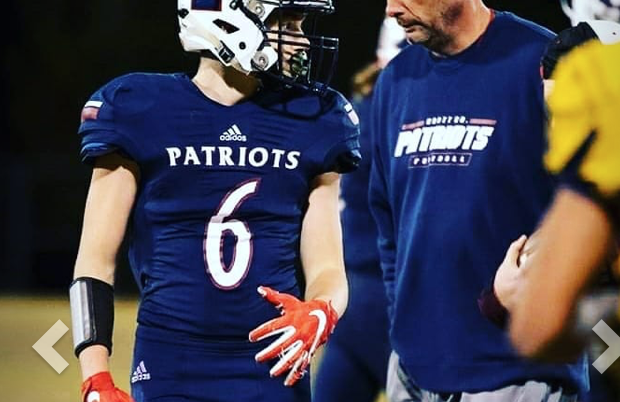 It is easy to assume a team struggling is one which should be completely ignored coverage-wise. Well, let us assure you of this, there are great football players in Kentucky on every roster. The difference between the haves and have-nots in Kentucky High School football comes down to how many are on the roster.

Teams which struggle may not have but one good football player, maybe two. Teams which flourish have 4-6 or so. Should they have 7 or more, they are a contender. Great players can hide a lot of mediocre to bad slotted around them.

The Whitaker kid can play. Blake Whitaker is a 2021 class kid who is only 5-8 and weighs just south of 150-pounds. That notwithstanding, the kid is averaging, through the games played thus far, around 40 or so yards per reception. When a receiver averages that kind of yardage, they are NOT just catching screen passes, if you catch our drift.

Knott County, who dropped the first four before winning the last two consecutively over Betsy Lane and Morgan County, travels to take on Leslie County this Friday night. They will find a Leslie football team which has only won twice, much like Knott, but one of its losses was a one-pointer at home to Middlesboro in overtime just this past Friday night. The Middlesboro game was one Leslie led for much of the night before Middlesboro charged back to beat them late in the 4th quarter and then on into overtime.

For Knott to stay in the game with Leslie, they will need Whitaker to stretch the field for them and get vertical for easy scores. Knott will also need another target to develop as Whitaker has accounted for a disproportionately large portion of QB Will Weinberg’s passing yards. Knott could also benefit from some ground production similar to what helped lead them to their 27-8 victory over Mogan County a couple weeks ago.

The road doesn’t get any easier for Knott County. After traveling to play Leslie County, Knott will come home to play the “Beast of the East” in Breathitt County and its multi-faceted offensive attack with its stingy “Nobody” defense.

Blake Whitaker figures to be prominently featured in Knott County’s football plans. After Knott finishes out the season, they will have to get ready for a likely playoff date upcoming in a few weeks. The Riverbank in Jackson, Kentucky is a probable first round destination. It will be up to players like Whitaker to silence the cow-bells and stifle the cannon or it will be basketball season in Hindman.

If you enjoyed this article and wish to gain full-access to the site, thensubscribe monthly to Kentucky Prep Gridironby following the prompts!