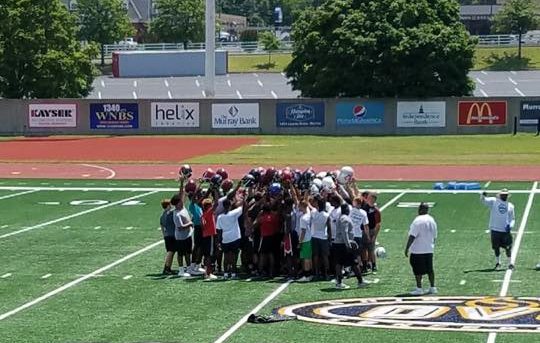 I was privileged to travel to Murray, Kentucky and spend the day with the Kentucky Future Stars for their first three practices.  In the morning, they were in only helmets, went with uppers in the afternoon session and then were full gear, full contact for the evening session.  I am now going to fill you in on some of my thoughts and impressions, take it for what it is worth and there is no way I will be able to specifically mention everyone who shone, really no one played poorly.

First, at quarterback, Larry Cummings Jr. is a kid I badly wanted to evaluated coming into camp but information about out-of-circuit, middle school kids can be hard to attain. Larry is the son of a coach and is 5’8″ 186 pounds, so he is thick. He plays in a Spread system but Larry is very comfortable setting up in the pocket and throwing the ball.  He has an excellent release point and gets the ball out quickly and his ball is accurate and receivable while still arriving with sufficient zip. He’s really good and he looked it all day long in every individual or team drill in which he participated. EJ Austin really showed out in the last session of the evening when the offense and defense went to team scrimmage.  Austin is just a gamer. He doesn’t throw the ball with the same technical polish as Cummings but is faster and more elusive and more likely to hurt a defense on the run. Under the lights last night, in the last session of the day, Austin shone.

At running back, this is the deepest and most talented single position group on the field. There are 6 of them and each brings something different to the table. The ability of Austin Gough to run tough between the tackles, turn on the jets once into the second level and punish tacklers who even dare to make the attempt is jaw dropping. What else is jaw dropping is his physique. This kid is crushing it in the weight room and it really shows. I am not sure what he weighs now but I wouldn’t blink at 200 and it is solid rock. LaVell Wright also ran the ball well, both inside and out, and Ethan Mills and Austin Oppel each had his moments changing the pace or getting tough yards.

At offensive line, I love the move of Hunter Scott to Center.  Hunter is a 6’0″ 290 pound grown man.  He benches 285 and squats 385 and moves very well for someone his size.  He just owned the A gap last night in practice as the defenders only chance is to run around him; because there just isn’t any running over him. Quintrell Dixon, the 6’5″ 330 pounder from Louisville showed up hoping to play DL but it became apparent he is really more of a factor as an OL as he played most of the day at RT. When he moves his feet with his length, he has the ability to be really effective. Zack Russell really has matured in the weight room and looked fantastic at TE. We know he’s good, one isn’t an All-American for nothing.

The receivers are long, athletic and can catch the football. Elijah Blakey and Isaac Dimmock look really good getting vertical or coming across the middle.  Isaac is really thick on top of being tall and fits into the category of he’s on the eighth grade team? I also reiterate that we love Nick Coates and what he brings to the receiving corp.  Nick runs well disciplined routes, isn’t afraid to cross the DB’s face in the middle of the field, moves well with it after the catch and is really fast.  Coates has been working hard in the weight room too.

Along the Defensive front Cameron Willis and William Long anchored the inside of the four man alignment and really did well.  Sometimes, in individuals, from the stands, it it hard to accurately evaluate inside technique guys because the evaluator doesn’t know what stunt or slant the player was asked to execute. During the last session of the three practices, under the lights, William Long began to take over the action using his incredible strength and burst to get into the gap and backfield before the Offensive Linemen could counter. Long was disruptive, to put it succinctly, when the offensive and defense were in full gear, full contact.  All of the ends came off the edge last night and got up field and applied pressure very well.  Cameron Dewberry and Darion Derringer both looked really good and exhibited a fast get-off and ability to use their hands well to keep the Tackles big mits off of them while causing havoc getting up field pressure.

At LB, Justice Thompson is a hitter who seems to understand the concept of getting down hill from his MLB position. A poignant moment last night was, before going out for session 3 in full gear, one of the Kentucky players, in the lobby of the Team dormitory, said Remember Justice, we are all on the same team here.  Try not to hurt anyone. Pretty obvious to me he enjoys contact. It is equally obvious those contacted don’t seem to enjoy it much.

In the defensive backfield, I thought Isaiah Forrest and Bryce Yates looked particularly good. Yates is diminutive but really does a sure-handed job tackling in the open field and you can tell he has been well coached as he drops into coverage and maintains excellent contact with receivers. He has really fluid hips and flips his hips well to get on top of routes.  Forrest is just a stud. I don’t know what else to say about him.  He is thick, fast, fluid, explosive and plays with a linebacker’s mentality in the run game. He will probably play safety in the game Saturday but we see him playing OLB sometime during his career.

Now, the secret weapon may be kicker Ben Schofield. Place kicking is difficult in games like these as the kicker is having to work with a holder with whom he has no rapport and a snap about which he has no reason to be the least bit confident. That aside, this is the kicker’s second year in the game and he has excellent range for his age and very accurate.  Knowing a little about his new HC at 6A McCracken County in Paducah, Mark Clark, former coach at HHS, McCracken County football is looking forward to having a young kicker in Schofield who will be a point scoring machine during his career and maybe even Saturday, provided we can get the snap and placement executed.

Overall, I am confident that what I saw yesterday fairly represented the best the 2021 Class the Commonwealth of Kentucky has to offer as this team is considerably deeper and more talented than they were last year.  Some of it is player development and some of it are new faces whom are upgrades over last year. I would like to say it would be nice to have Aaron Hash, Reece Jesse, Lane Rushing, L’Ray Coleman, Preston Spurlock, or Jaylin Bross but no All-Star team is going to catch every single star.  This one has caught the Lion’s share.