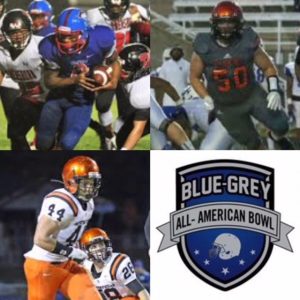 Yesterday, probably the most prestigious High School All-American game, the Blue-Grey, conducted a Regional combine in the Nashville area at Pope John Paul II High School right across Mansker Creek, just over the Sumner County line. The ones performing well enough at a Regional will be invited to a Super Regional and, from there, could be invited to play in one of four games which will be played in NFL stadiums at four different locations. These games are either aired or streamed on ESPN. So, yeah, it’s a big deal. What we would like to do now is break down some of the Kentucky products who performed at yesterday’s event. I do want to mention that Fort Campbell High School from Oak Grove brought an entire bus and its new coaching staff. I didn’t get to interact with the Falcons as much as I would have liked. I thought there were some very good individual performances from some Falcon players and, in talking with the new coaching staff, I left with the impression those boys are on the way back to prominence.

Frankly, I just don’t know how 6-2, 195 pound, LB and AFI-KPG All-State football player Austin Gough, who is a rising sophomore at Owensboro High School, could have performed any better yesterday at the combine. I know William Long and he are both 2021 prospects and these combines are set up to evaluate rising juniors and higher, and not really rising sophomores; but, what the Hell, the younger guys keep showing up and showing out! It is not their fault they have worked themselves into position to perform at a level well in advance of their class rank. Yesterday, Austin Gough, particularly for a linebacker, ran a blistering 4.65  forty yard sprint, in a pouring rain, and registered a lightning quick pro-agility shuttle (5-10-5) of 4.3. I am not sure of his number in the standing broad jump, but I believe I heard the evaluator say is was 111 inches (9’3″). Austin recorded 17 repetitions at the high school rep weight of 185 pounds in the bench press, which was top-five in his position group. During the one on ones for the linebackers versus the tight-ends and running backs, Gough showed both the ability to get down-hill and meet plays and the ability, speed, and quickness to cover stuff crossing him and routes requiring him to drop and cover the zone between the 2nd and 3rd levels. We conceded it is difficult to image a now freshman, rising sophomore, making either the Super Regional or being invited into the prestigious Red Zone Prospects; however, Austin Gough’s performance yesterday will make it difficult for the evaluators to not include him. Overall, he was one of the best linebackers at the combine.

There has been a lot of ink spilt about this particular member of the Class of 2021. His being moved to Center just looks like the perfect move both for his team and him. At yesterday’s Blue-Grey Combine (Tennessee Regional), William Long, an AFI-KPG All State football player from Hopkinsville, fully demonstrated why there is always so much fuss about him as both a football player and an athlete. Though undersized at 5-10 and 255 pounds, William dominated almost every person placed in front of him in the one on ones which, and I don’t care what anyone says, is still the most important part of any combine in regards to evaluating linemen. The one on ones aside, William Long pretty much dominated everywhere. William registered one of the faster 40 times among his position group (OL) in running the sprint in 5.3 seconds. William exhibited good explosion in the standing broad jump with a leap of 92 inches (7’8″). William finished second, among over 80 invitees to the All-American combine, in reps at the high school rep weight (185) with 29 repetitions. William Long had one of the quicker pro-agility shuttles among his position group, covering the 5-10-5 yards in 4.71 seconds. Now, it is difficult to imagine a now freshman, rising sophomore, making either the Super Regional or being invited into the prestigious Red Zone Prospects, however William’s performance yesterday will make it difficult for the evaluators to over-look him.

Justin Geisinger is the present head football coach at Pope John Paul II High School and, yesterday, was one of the lead evaluators at the combine of the offensive linemen. Coach Geis, as his players commonly and affectionately call him, worked pretty exclusively with the linemen, at least once they went into the agilities and one on one portions of the combine. Geisinger, himself a former NFL offensive lineman, was very generous in his praise of freshman (rising sophomore) William Long. Here is what Geisinger had to say...First of all, I want to stress there were some really good linemen at this combine. This combine was stacked with Division 1, FBS and FCS level talent. In spite of William’s being the youngest lineman, class-wise, at the combine, Long’s performance really stood out to me. Long demonstrated ability to compete against upper classmen who are, themselves, future division one college players. Suffice it to say,William, from what I saw, did more than merely hold his own. Everyone always notices his incredible strength, but what I love about William’s play most is his footwork. As a blocker, Long is a “finisher” and I was impressed with both his first and second step. When you look at his body of work yesterday overall, taking his combine results, which were among the best in his position group, together with his drill and one on one work and the stuff he did while working directly with me, Long was, definitely in my opinion, one of the top 2-3 linemen (offense or defense) at the entire combine.

Another of the Hopkinsville High School products to perform yesterday was 2020’s, Denarius Red Barnes. Barnes, an AFI-KPG All-State football player is a 5-11, 225 pound middle linebacker who is particularly adept at getting down hill on ball carriers in run defense. Barnes has the size and frame for which one looks at his particular position and, on offense, is exactly for what teams look at the fullback position. Either way, he meets you in the hole and punishes you for being there. Barnes performed the same testing as William Long but I wasn’t around to hear some of his results. The staff doesn’t publish the results, officially, until next week, but I did get to hear some of his testing results and liked what I heard. Barnes ran a 4.97 40 yard dash, about which he was visibly disappointed, but for a 2020 prospect at MLB, is not bad. Most prospects who are new to combines have poor 40 technique. Usually, unless at a combine, players don’t run a lot of 40s; so they aren’t good at it. I would put Barnes in that class. I believe Barnes is a 4.8 or better 40 yard sprinter when he learns the technique to running a 40. Barnes registered a very good pro agility shuttle at 4.5 and Barnes acquitted himself very well in the bench repetitions at 185 with 22, which I believe to be the best among the linebackers and one of the top 5 or so at the entire combine. I would be shocked if Barnes wasn’t invited into The Red Zone and put through to a Super Regional.

Another Hopkinsville, Kentucky product whom looked really solid all day long was Ellis Dunn, 2019. Ellis is a super explosive, lengthy, edge target who slipped on the turf while attempting his 40 yard sprint and still registered a respectable 4.65. We know Ellis is faster than this as his personal best 100 meter time in Outdoor Track is 11.2. Ellis was particularly impressive in the offense/defense one on ones working against the defensive backs. Like the linemen, I don’t care what anyone says, that is the portion of any combine in evaluating either defensive backs or receivers where the evaluators base much of their decision as to whom advances. Ellis exhibited vertical explosion off the ground to catch the ball and the ability to both time his jump and high point the football by catching it in his hands away from his body. I thought he caught it well in spite of the ball’s being both wet and slippery owing to the rain. I am sorry, I didn’t get over to see what Ellis broad jumped or what his pro-agility shuttle was but I can tell you he got 13 repetitions at the bench press weight of 185 pounds. In that discipline, he tested toward the top of his position group. I would be shocked if Dunn wasn’t invited into The Red Zone and put through to a Super Regional.

Danville, Kentucky’s, Class of 2019, Tanner Crawford was at the combine yesterday and I really didn’t get to follow him as much as I would have liked. I can tell you he showed incredible strength at the running back position repping 185 pounds 19 times. Tanner is a very unassuming guy, standing there in shorts and a shirt wearing his glasses, he looks as if he might be captain of the chess team. He’s softly spoken too and very humble. You forget when you come up and shake his hand that the very unassuming, Clark Kent looking guy leaning against the column, gained 1,928 yards from scrimmage last season for the 14-1, State Champion, Boyle County High School team. In addition to his nearly 2,000 yards rushing, Crawford scored 25 rushing TDs last season. Tanner is 5-11 and weighs 170 pounds with plenty of frame to add weight. I wish I could tell you his 40 time, pro-agility shuttle, or even his standing broad jump but I can’t. I will have to go to the website when the results are posted Wednesday, like everyone else, I guess. However, I can tell you that having guys, like Tanner Crawford, come all the way from Danville, Kentucky to attend the Tennessee Regional should give you some idea of the quality of participants at this event. I look for this player to be both Red Zoned and to move through to a Super Regional.