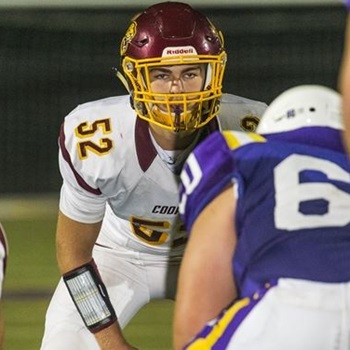 There is a reason we are spending our offseason forecasting the players who will become household names this coming in-season. There are way more quality football players in Kentucky than people outside the commonwealth will ever credit.

We were talking with the direction of the Appalachia Prep Combine here the other day. His name is JT Powell.

JT and we were reminiscing how far the talent in Kentucky has come since our first coming to the APC to compete in its prestigious event. We still remember our first group of Kentuckians who were very solid and performed very well. However, none of them were winning positional MVPs.

This past year we had several players win MVP of their position groups and a few challenge for MVP of the entire event. We have come a long way.

Talent like Jake Harmeyer is why. Incidentally JT, if you are reading this (and we know you are) you might take down this guys information for next year’s combine.

Jake is listed at 6-0 and 190-pounds. At least, those were his measurements at the end of his sophomore season playing Class 5A football in the 5th-District for Coach Randy Borchers’ Cooper Jaguars.

We have no idea how much muscle has been packed on the frame in anticipation of his junior year. He lists FB/TE/MLB/SS among his positions. The film we saw of him had him playing both inside and outside linebacker.

We suppose it entirely possible some of the film, where he looked to be playing OLB, could have been his playing SS and walked up into the box as a “Jack” for run defense. We don’t know enough about the Jags’ scheme to comment on that.

We believe he is listed as a SS for recruiting purposes. He is framed to play SS in college provided he has 3rd-level type speed and quicks.

Harmeyer was second on the defense in ’20 with 64-tackles. This is impressive in light of his only playing in 7 of the team’s 9-outings. Harmeyer missed both the games with Highlands and Ryle, then came back in the playoffs first round and led the team with 9-solos against Covington Catholic.

We don’t know why he missed the two games he did. It wasn’t an academic issue as he carries a 3.8 GPA at Cooper.

Harmeyer recorded 2 TFLs, recovered a fumble, and caught a pass for 11-yards on offense. Players don’t play both ways in 5A football much, so his lack of production offensively isn’t surprising.

Watching his film, the kid pursues and scrapes well for an undersized kid working himself down the line to make plays as an underclassman. He challenges blockers well and is able to shed and make plays.

His tackles behind the line will increase when he is able to scrape down the line of scrimmage and knock would-be blockers into the offensive backfield instead of them knocking him a few feet back into the defensive second level. That part of his game will grow with him.

Overall, this is a really fine player and a next-level candidate. Exactly which level will depend largely on his speed and quicks. He plays in space well which indicates his shuttle time is from respectable to good. Could be terrific, there is just no way for us to know.

His film indicates he moves well in space. He tackles opposing running-backs in the open field and is hard to shake.

This kid will kill it in ’21. It is a good thing too, as Coach Borchers will never be satisfied with sub-500 finishes. College recruiters should monitor this prospect’s development keenly over the next two seasons.