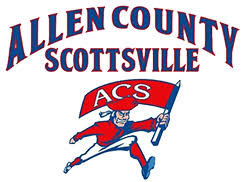 His name is Jacob Lightfoot and he is from Allen County-Scottsville, Kentucky. He plays for head coach, Bradley Hood, in the 2nd district of Kentucky’s 4A classification. The mascot for ACS High School are the Patriots and, in 2017, Lightfoot was part of a three headed monster which comprised one of the most potent passing attacks anywhere in the Commonwealth of Kentucky. The first head of the three-headed monster was the QB from last season, Chase Wilson, who is headed to play collegiately at Kentucky Wesleyan, and why shouldn’t he be? Wilson completed 156 of his 275 passing attempts, a year ago, for 2,667 yards passing with 32 aerial TDs. Head number two is 2019 WR, Jacob Lightfoot,who caught 56 of the 156 passes completed for 1,273 receiving yards and 15 TDs. Head number three, last season, was class of 2019, Cayden Ross, who caught 48 passes for 747 yards and 12 TDs. All told, Lightfoot and Ross caught 104 of Wilson’s 156 passes completed, for 2,020 of his 2,667 yards thrown, and 27 of his 32 passing TDs. I am sure Chase is happy he is the one moving on to college football, leaving Lightfoot and Ross behind in Allen County, Kentucky and not vice versa.

So, this begs the question, for the Patriot fans hoping to improve on last year’s 7-4 record and first round playoff exodus to Madisonville North-Hopkins 28-7; who’s going to be around to throw the ball to Lightfoot and Ross? Well the most common candidate is sophomore QB Zane Ward. Ward may well have torn up junior varsity, there would be no way for KPGFootball to know because, if we don’t write about a game below the varsity level, then it goes uncovered. We can tell you this, Ward didn’t get much PT last year behind Chase Wilson. Zane Ward only threw 2 passes in Allen County-Scottsville‘s games a year ago. On the bright side, he completed one of the two for a ten yard gain. Hey, it could have been much worse! The only other Patriot to complete a pass last season was Carson Taylor and he is out of eligibility and was a receiver anyway (16 receptions for 216 yards). To say the issue as to whom replaces Wilson is both unsettled and unsettling is a bit understated.

However, should the Patriots figure out how to get the ball downfield through the air, it is clear Jacob Lightfoot is as good as it gets at catching it. Lightfoot has excellent length for his position as he is 6-0 and weighs in at 175 pounds. Lightfoot has a registered 40 time of 4.7 seconds and has a really quick pro-agility shuttle of 4.22 seconds. With his spacial quickness as demonstrated with his shuttle time, we predict he will be well suited to play slot receiver where ever he ends up in college. Lightfoot has a maximum bench press of 205 pounds and has repped the high school rep weight of 185 pounds twice. Jacob also back squats 355 pounds which corroborates both his forty and pro-agility times. One thing appears abundantly clear, should the Patriots find someone to get the ball out there, Jacob Lightfoot will certainly go get it.