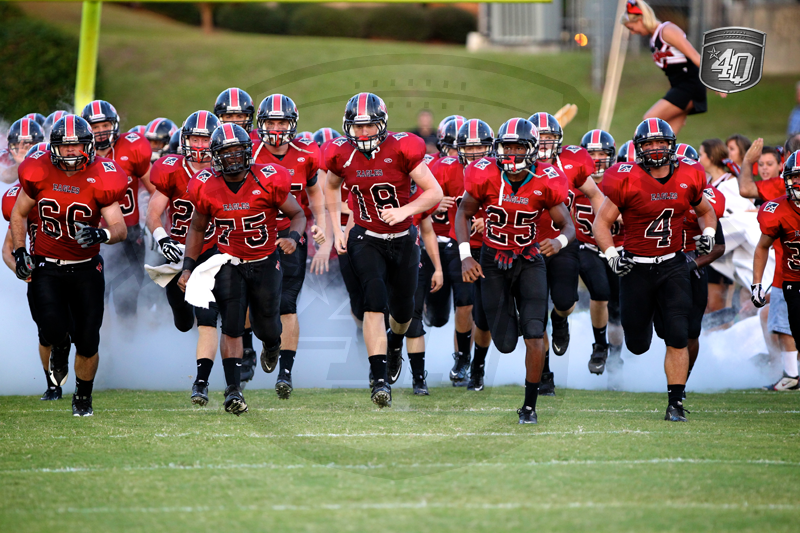 There has been plenty of ink spilt over Taylor County’s Logan Parker. He came out of middle school one of the most ballyhooed players in Kentucky, ranked as high as 14th in the country as a prospect in his class, a former member of all the Team Kentuckys, and a FBU All-American. We have featured him twice and mentioned him in 16 articles total here on KPGFootball. He also was selected to our AFI-KPG All-State Football team as a defensive lineman. Is he a good athlete? Well the combo DE/FB also plays varsity basketball. Not a lot of other players in the Commonwealth too keen on taking a charge from him.

Logan Parker has been listed anywhere from 6-1 to 6-2 in height and his weight is generally recorded as being between 260 and 265 pounds. Logan runs well, as he has a registered 40 yard dash of 4.9 seconds and runs the pro-agility shuttle (5-10-5) in 4.88 seconds. Logan is also one of the stronger kids in the Class of 2020 with a reported 350 pound bench press and a 455 pound back squat. This past season for the Taylor County Cardinals, Logan carried the football 65 times for 343 yards rushing with 9 TDs on the ground from his FB position on his way to tallying 74 points for the Cardinals’ offense. If you think about it, that is quite a bit of production from a position which is referenced in football circles as being an offensive guard aligned in the backfield. Logan, last season, averaged nearly 5.3 yards every time he was called on for a carry. Let’s not act like the fullback’s primary responsibility is running the football and scoring TDs, because it isn’t in Taylor County‘s or anyone else’s offense scheme deploying one. The Cardinals, who went 7-4 a season ago playing in the 4A classification out of the 5th district, boasted a 1,000 yard rusher, in 2021 Wes Oliver. Oliver, a freshman a year ago, benefited greatly from following Parker all around the field. Logan was Oliver’s lead blocker on may, if not all, of Oliver’s 18 rushing TDs. Oliver will be greatly relieved to see old number forty still around to lead the way in 2018.

Logan Parker played a little defense too. He was Taylor County’s second leading tackler on the team from his DE position which is quite astounding in most defensive alignments which generally feature linebackers and are lead in tackling by players so deployed. Parker, last season, contributed 80 tackles screaming off the edge defensively and threw in a fumble recovery for good measure. We believe Logan Parker is one of the more dynamic, explosive, powerful, quick-twitch, and strong players at his positions in Kentucky. We really think his future in college may be along an offense front on the interior or deployed in the middle of a defensive line as opposed to coming off the end but, then again, that is just we…and we are a different breed of cat!