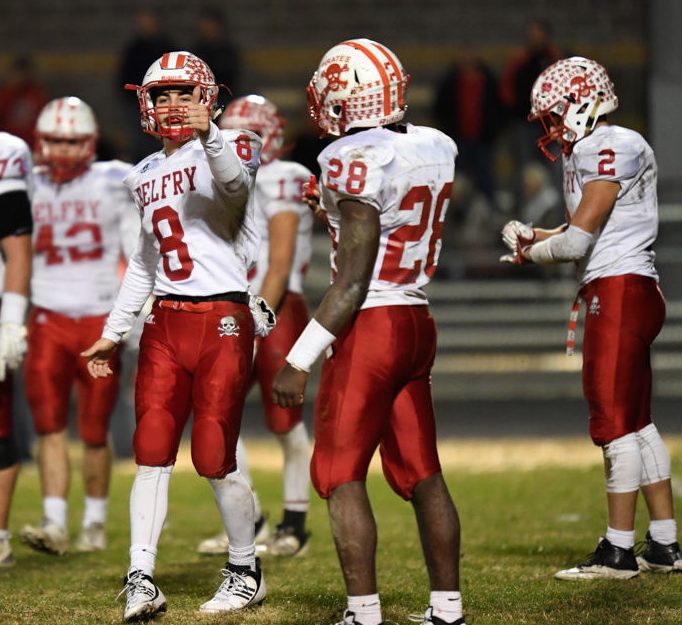 One of the big topics around the mountains is how exactly do the Pirates of Belfry replace the backfield it lost to graduation. Everyone knows what Taveon Hunter did in setting a new Kentucky, single-season record for average yards per carry with a minimum of 75 carries. Hunter gained 1,285 yards in 78 carries for an average of nearly 16.5 yards per carry with 15 rushing TDs. Pretty hard to replace; but lets not pretend Hunter was a one-man show. Fellow senior Derek Wellman gained 1,014 yards himself in 120 carries for a per carry average of nearly 8.5 yards and contributed 18 rushing TDs. Together the pair rushed for 2,299 yards on only 198 carries for a per carry average of 11.61 yards, per attempt, with 33 rushing TDs. How do you replace that? Well, I can’t speak for replacing Hunter, but Coach Haywood is optimistic he may have a Wellmanian solution in Class of 2020 Peyton Hensley.

Peyton is 5-11 and weighs 190 pounds and is one of the best fullbacks, from scrimmage, in Kentucky’s 2020 class. I mean, yeah, you would like to see him bigger, let’s say maybe the size of his little brother, Kobe. Kobe Hensley is 6-1, 210 pounds. Still, it is hard to argue with 792 yards from scrimmage in 87 rushes for 11 rushing TDs. That comes out to around 9.1 yards every time Peyton touched the football. Peyton has a recorded bench press of 225 pounds and deadlifts 315. Those are numbers which will certainly continue to improve as Peyton continues to work through the Belfry strength & conditioning program. Now that Peyton Hensley figures to be an emphasis in the running game going forward, the weight room work figures to become even more of a priority. It’s one thing to prepare for a season knowing that Derek Wellman and Taveon Hunter are around, it’s quite different knowing you maybe the offensive focal point and emphasis next season. One still has to marvel at the Belfry offensive line, however, as Peyton was the third option, last year, and he still gained nearly 800 yards from scrimmage, average over 9 yards a carry, and scored 11 rushing TDs.

Certainly can’t argue with Hensley’s speed as he was the third leg of the Belfry’s Region 7, championship 4 X 100 relay team which ran a 44.98 at the Regional. Peyton appears to have the right mix of strength, power, explosion, and speed to go along with a frame which appears to be lengthening and filling out. Peyton may have big shoes to fill in replacing Hunter and Wellman, but it would appear he also has mighty big feet.