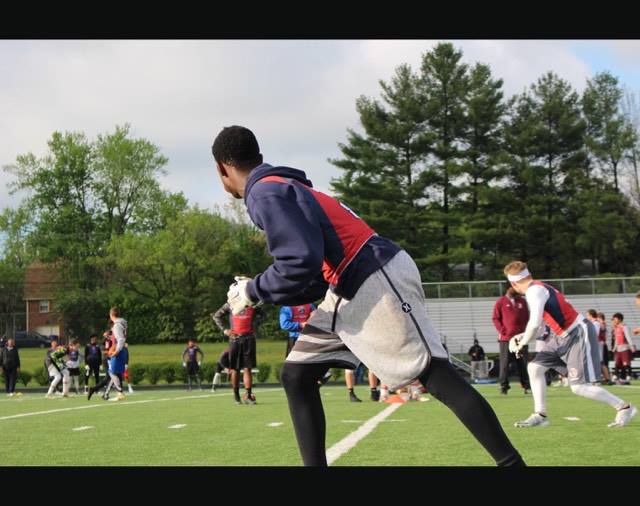 Isaac Dimmock attends Ramsay Middle School in Louisville, Kentucky and plays for a team in the Louisville Youth Football League (LYFL). For those not in the know, Louisville is a city where the persistent debate is which league plays the superior brand of football and/or has the most talented players.  There’s the Metro Louisville Youth Association (MLYA), the LYFL or the KYMSFA?  My friend, Coach Ricco Hughes, Executive Director of the Kentucky Future Stars program has consistently maintained there are superb players who suffer from less publicity and notoriety in both the MLYA and the LYFL and the Future Stars rosters always contain a good number of each in addition to the KYMSFA players. Coach Mel Blakey, who won the D-I State Championship this year in KYMSFA with Newburg Middle School, and who has coached in both leagues, appears to believe the KYMSFA, which has now been subsumed within the KHSAA, is the superior brand of football, but whose to say whose players are better.  We can’t resolve that dispute today, but there is no dispute Isaac Dimmock is one of the best WRs in the Commonwealth of Kentucky, if not America.

Dimmock, a nationally ranked WR , 2X Kentucky Future Star, 2X LYFL MVP and a member of the U.S. National Football Team has been plucked out of the LYFL by Decatur High School in Georgia to play his HS football in the Peach State. Dimmock is a 6’0″ 170 pound edge target with plus length and speed, having been laser timed 4.9 in the 40 with a pro-shuttle of 4.6. Dimmock has nimble, soft hands and is thick enough to get off the line and into his pattern with little regard for any jam threat a DB, up in his chest, might pose.  Isaac will be in Clarksville, Tennessee next month as a 2021 stand-out and he will be a vertical weapon for whom Tennessee’s DC and corners will have to account.

Kentucky Prep Gridiron believes this is Louisville’s finest receiver in the 2021 class, LYFL or KYMSFA/KHSAA, and, probably, Kentucky’s finest in that class too.  Remember ballers…PLAY THROUGH THE WHISTLE!