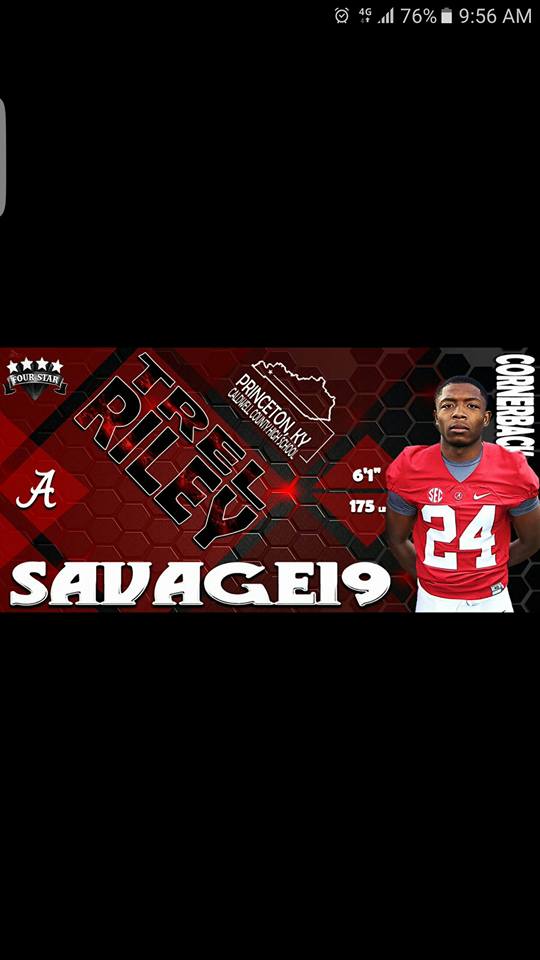 Kentucky Prep Gridiron assures you if you don’t know who Trel Riley is, 2019 Cornerback at Caldwell County High School, then you obviously have very little contact with Princeton, Kentucky. Trel is a 6-foot-1, 175 pound cornerback and wide receiver from Caldwell County HS. Riley as a sophomore tallied 56 tackles, five picks with one for a TD and forced a fumble in route to being selected All-Western Kentucky Conference and honorably mentioned for the All-State Football Team for the second consecutive year. Offensively, from his receiver spot, Trel caught 11 touchdowns.

Trel is an aggressive and rangy corner who plays physically, whether supporting the run defense or getting in a receiver’s chest and pressing him up at the line of scrimmage.  Something you don’t see much at  the high school level are corners who truly play press coverage. Most corners at the high school level are a little queasy about the prospect of the receiver getting off his jam and torching him vertically. Trel appears on his Hudl film to have confidence in his ability to shut down edge targets at the line. Failing that, Trel has the length and mobility to flip his hips and recover should the receiver get off cleanly and into his route. Kentucky Prep Gridiron doesn’t have a recent 40 time on Trel but, as a freshman, Trel registered a 4.32 second pro-shuttle which indicates he is “cat quick” especially for a 2019 kid and Trel is on his High School Track Team; so it is safe to say he moves well.

Riley doesn’t report any offers yet but he is just entering his junior year. KPG has learned Riley will attend the Nike Opening in Atlanta in 2017. Additionally, Riley has trips planned to camp at Alabama, Kentucky, and WKU this summer. Riley plays for the Kentuckiana Go Hard Elite 7v7.

Trel Riley has speed, quickness, explosion, hostility, toughness, athleticism and aggressiveness.  Is he the best CB in Kentucky High School Football?  Hard to say, but Kentucky Prep Gridiron believes it is a question worthy of asking.