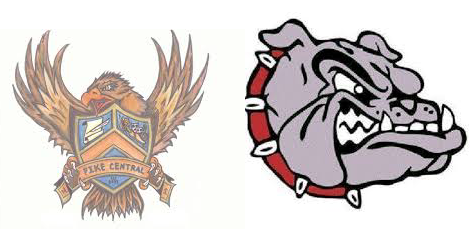 This week, inside the numbers, we decided to take a look at the matchup tomorrow night in Louisa, Kentucky between Pike County Central and Lawrence County. This is a very important game for Pike County Central and Lawrence County too, but for vastly different reasons. For Pike County, they don’t want this season slipping away from them and this is an opportunity to get a road win and against a Class 3A, District 6 opponent. Pike County Central is 1-0 in its district. For Lawrence County, they are 1-0 in the district also and currently looking to keep its district slate clean, as are the Hawks. Let’s take a look inside the numbers of this pivotal game and see if we can’t clarify a likely victor in Louisa, Kentucky Friday night.

Common Opponents: This is something at which most odds-makers look but something the value of which isn’t too clear. We don’t ascribe this much weight at KPGFootball but do ascribe it a little. These two teams haven’t played a common opponent. Pike County Central hasn’t beaten a team this year even in the league with Greenup County, which is Lawrence County’s most impressive win. By year’s end they will have played many of the same teams, but not right now.

Pike County Central: The Hawks are the 143rd ranked team in Kentucky, according to both MaxPreps and Calpreps.com and the 10,144th best football team in the Country.

Lawrence County: The Bulldogs are the 101st ranked football team in Kentucky, according to both MaxPreps and Calpreps.com and the 7,137th best football team in the Country.  The computers slot the Bulldogs 42 notches above the Hawks in Kentucky and 3,007 notches, nationally. This is not an impossibly wide gap to bridge as was shown back when we took Todd County Central to beat Hancock County as those teams were similarly distanced with the possible exception the underdog there, Todd County, was entertaining Hancock Co. and here the higher rated team is at home, but it is an advantage.

Game statistics: Lawrence County has gained 2,291 rushing yards in 8 games and has thrown for only 82 yards while allowing its opponents to throw for 1,053. So the Bulldogs are susceptible to giving up passing yards, if they happen to be playing a team that can throw the ball. The problem is Pike County Central is not that team. The Hawks have allowed opponents 209 points in 6 games and have rushed for 1,565 while passing for only 323.

Intangibles: The biggest intangible here may be where this game is being played. These teams are fairly even, though, clearly the numbers show Lawrence County to be the better team, especially as they both are intent on rushing the football. However, we are compelled somewhat by the fact Pike County Central hasn’t shown they can go on the road and beat anyone this year. Maybe this is the night they demonstrate just that, or maybe not. To have a chance in this game, Pike County Central has to be secure with the football. Just can’t afford to give Lawrence County possessions they aren’t supposed to have.

Well guys, this is what the tea leaves tell us. Our being more impressed with Lawrence County is largely owing to its needing to its being at home and its having at least one very quality win. Well, I suppose we shall how this plays out Friday night! Either way, we can’t wait to see how this conflict resolves and it will be interesting to see whether the statistical analysis, employed here, foretells anything, at all, about the outcome. The great thing about football is; it still has to be played on the field. Thanks for joining us for Inside the Numbers.