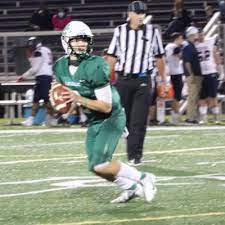 Dane Parsley (’25) for Warren East had quite a night in its district matchup with Warren Central. Parsley carried it 17-times for 175-yards rushing and two (2) TDs.

East won the battle of the Warren’s over Central 41-14. Warren East is 4-3 and will entertain Allen County-Scottsville next week.

Speaking of a hold-back guy, what’s Isaiah Fitzpatrick been up too? Well, this past Friday night, Fitzpatrick burned J-town (Jeffersontown High School) for 208-yards rushing on 19-carries, four (4) of which he toted for TDs.

This season, Isaiah is averaging 131.8-yards rushing per game. Fitzpatrick leads his team in yards from scrimmage, rushing TDs, scoring, and is among the leaders in tackles. If you’re looking for a “play alike” from years gone by in Kentucky High School football, he reminds us of a fully healthy JaTorian Dillard (’19) from Hopkinsville High School.

Cameron Hergott (’22) had another night over the course of a season it will be hard to not deem worthy of a second, consecutive “Mr. Football” honor. We know he has before won the Mingua Beef Jerky Award too.

While we like to spread it around, it is hard not to notice 13 for 14 passing for 207-yards and a couple of TD tosses together with 18-rushes for 145-yards and a ground score accounting for all three of Class 2A Beechwood’s scores in its 21-14 win over a 3-3 Dixie Heights (6A). Dixie Heights is a team which owns wins over both Connor and Highlands.

Collins High School looks to be back in a big way. They ran their record this weekend to 5-1 and Kenyon Goodin (’23) had an incredible night.

Goodin, aptly named, completed 21 of 32-passing attempts for 359-yards and five (5) TDs. He carried the football 14-times, two of which he also housed. He accounted for over 400-yards of total offense (359 passing, 62-rushing) and all 7 of the team’s TDs in addition to leading the team with 10-tackles.

Xavier Jordan (’22) caught five-passes for 130-receiving yards and a TD while Mark Hutzel (’22) caught seven (7) balls for 90-yards and two scores and logged the team’s only interception. Ryan Koval (’22) was perfect in both PATs (7 for 7) and nailed his only FG attempt.

Evan Pitzer (’24) had a night for Covington Catholicn(5A) in its win over district five foe, Boone County. Pitzer was 11 for 16 passing for 162-yards with a pair of TD passes and rushed for 82-yards in 3-attempts with a rushing TD. Covington Catholic ran its record to 4-3 with a trip to Highlands upcoming.

The player of the game has to be placekicker, Ian Montgomery (’25). Montgomery nailed his only field goal attempt. Of course, it was the one which won the game.

Perry County is 4-2 and bracing for a home date with Johnson Central coming up October 8.