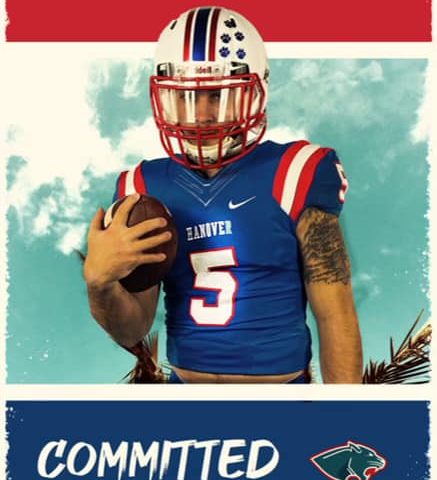 I don’t know whether we have started a trend here on KPGFootball or just read the tea leaves well out in front of any of our competitors. We have been covering for around a month the fact the D-1 “wait and see types” were disinclined to “wait and see” what their options might evolve into being in the midst of this pandemic.

Hanover College, one of the country’s most prestigious liberal arts colleges and possessors of both tremendous facilities and opportunities provided its graduates (and players particularly), dipped their program’s lure into the waters around Meade County, Kentucky. Panther fans will be right impressed with what the football team landed. It was quite an impressive catch.

Austin Oppel transferred into the Meade County from New Albany High School. New Albany, in Indiana, plays 6A, big-boy football. So does Meade County, just south of the Indiana border.

Oppel played his sophomore year in New Albany and played this last two years at Meade County. Consider this, he only got to play 9-games his senior year, was limited to 7-games his junior year and still, over the three years, gained 3,196-yards from scrimmage in 28-games, scoring 39-rushing TDs.

Austin Oppel averaged 7.7-yards a carry, over three years, 114-yards per contest, and scored approximately a touchdown and a half every game. There aren’t too many high school running-backs who run for over 3,000-yards in a career, period; much less in only 28-games and over three years. He may have run for significantly more yards, we really don’t know what he did as a freshman playing varsity in New Albany.

One of our agents talked to a college scout and “super recruiter,” about Austin Oppel last night over the phone. This guy, who preferred not to be named in the article, told KPGFootball, “Hanover appears to be picking off some real burners in the ’21class. They have committed some guys who probably beat Oppel in a foot race. However, football is not a track meet.”

This scout went on to say, “Oppel is as fast padded-up as on the track. That is what makes him such a special player. This kid has a ton of dawg in him. This is a D-1 skill-set heading to play D-3 football. That’s how you win championships at that level of play. Recruiting D-3 talent to play D-3 football just gets you home early for Christmas break.”

Congratulations to Austin Oppel on his decision to play football for a primetime program with a big-time academic reputation and a degree which alters graduate’s lives and prospects to the decided better. Football has the ability to change both lives and trajectories. We love where this prospect’s life trajectory appears to be arching.