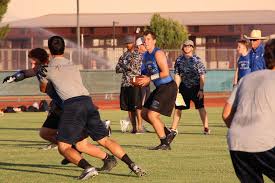 Recruiting has become quite the animal, if we are being honest, particularly in football. It seems, more and more, like the ability to play the actual game means less all the time.

College recruiters call on high school coaches less and less in evaluating talent for their incoming classes. Evaluation of game film has become an antiquated dinosaur.

What has replaced the high school coach and the Friday Night Lights are the player’s “trainer,” Seven on Seven tournaments (Seven’s ball), and combines. What we are seeing less of are college coaches in the stands or on the sidelines watching players absorb or deliver hits.

I have an anecdote for you which will blow your mind. It is a scenario I have long known to be true but one which still sort of shocked me upon learning it’s accuracy.

Three-to-five years ago, and we know exactly when but are being opaque on purpose, there was a top-flight athlete/player who had no offers. This guy was FBS, power-5, talent, and just about everyone knew it; but, for whatever reason, he had NOT been offered.

He goes to see a trainer/handler in an area in easy traveling distance from he played. This “trainer” assured the player, once he signed on with him, he would get the situation in hand.

The player signed on with the trainer. The trainer picked up the phone and called a buddy of his coaching football at a power-5 school. The handler told his friend, an assistant football coach on the program’s staff, “Look, we are going to tweet out my guy has an offer from your school. We are doing it to get the ball rolling on this guy. You okay with that?”

The coach said, “Sure guy, whatever. It’s not like I can deny it any way. Go ahead, knock yourself out!”

By the time it was all said and done, the athlete who formerly had no offers now was the most coveted prospect in the area. Heck, the school which “faked” him an offer decided, when all of their competitors offered, that they REALLY wanted him.

The guy went on to play FBS, Power-5 level football and has done really, really well. Turns out, he was “good enough” the entire time.

It is a shame it took some “dog and pony” show to get everyone to see it. It is more than a shame, it is a joke.

I talked on the phone the other night with a college football coach who played 10-years in the NFL. He told me he played collegiately at the NAIA, Division II level. He was his NFL team’s first player selected the year he was in the draft. He played in 6-Super Bowls, winning one.

His words…not mine, “I was obviously Division-1 football talent. So why didn’t I play D-1? Simple, D-1 coaches miss on hundreds and hundreds of D-1 capable guys every…single…year.

Had this trainer not had the savvy to play the little ruse he did, maybe D-1 would have missed on the kid we’re discussing in this article too. Who knows?

The point is this…if you’re being recruited and you aren’t getting the attention you think your abilities deserve, you are probably right. Should you go and hire on with some guy like the trainer who paid off so richly for the athlete the subject of this piece? You know what, probably.

Now, not all trainers have the chops, or connections, this guy had. I will tell you this, if you are training athletes and you can’t pick up a phone and make that call, your competition is going to kill you. All of those athletes training with “such and such” facility in “such and such” town aren’t there for the work. Don’t kid yourself.

Sure, they will work on their forty-start with you and try to improve the shuttle time. However, don’t get it twisted; they are paying you $300.00 to $500.00 per month for results. Bottom-line..they can work on their 40’s with the track coach.

That track coach can’t pick up the phone and call an assistant coach at a FBS, power-five school and tell that guy that his player is about to Tweet an offer from that coach’s program. If you ask me, we’re giving the trainers way too much influence. I believe college coaches just need to go back to calling the high school coach and watching film for himself.