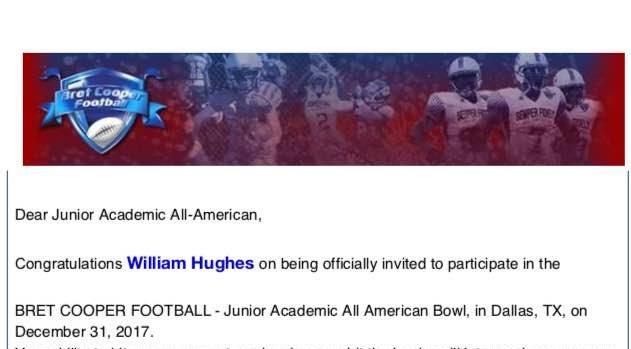 William Hughes a 5’10” 245 pound Class of 2022 player has officially been selected an All-American and will play in the annual Bret Cooper Game in Dallas, Texas, December 31, 2017. The selection committee made specific mention of William’s speed and athleticism in addition to his being explosive and strong. This is the second year in a row the Hopkinsville Middle School program has produced an All-American as William Long made last year’s team and played OG and MLB in the game, garnering the prestigious JJ Watt Award. William Hughes makes the second consecutive Offensive Guard to make the prestigious All-American Middle School Football Team from the HMS program in addition to four players in the previous three years whom have garnered All-State selection from along the offensive line (Seth Henderson 2020, William Long 2021, Tahj Manning 2021, William Hughes 2022).

Hughes, as an interior offensive lineman, has proven to be an accomplished pass protector from his LG spot. In the run game, he is a downhill, drive blocking machine. Hughes is persistently driving his man deep into the Defense’s 2nd and sometimes 3rd level. At DL for the Tigers, Hughes, this past season, in both 8th and 9th grade games, was un-blockable. Hughes has tremendous launch and get off working in tandem with active and violent hands shedding and discarding would-be blockers. Hughes also boasts a 4.0 GPA.

In speaking with his offensive line coach who will take over Hughes training as he enters the 9th grade, Jacob Ezell, Ezell related to Kentucky Prep Gridiron that upperclassmen better take notice of these young guys coming up stronger and more physically ready to play than at any time I can remember. I don’t know whether Hughes will play Varsity and contribute as a freshman or not, like Long has done. What I know is he has the frame and can develop the strength, provided he works this offseason, to be in that discussion. The message to older players is to keep working, grinding, and pushing. Just because you start one year means squat for the next.

I was able to speak with Bret Cooper about the inclusion of Hughes on this year’s East Team, which won last year’s game in a 22-6 route and Bret said, Hughes is a young man, in both his playing ability and academic standing, who represents the very best in Middle School athletics and academics. William Hughes is the exact type of player we exist to promote. We have before gotten really talented players out of the Western Kentucky area to play in this game, very successfully, like Austin Gough and William Long from last year. Hughes comes from a very well coached Middle School program at HMS which consistently produces All-State and All-American caliber players, particularly along the lines of scrimmage. We fully believe William Hughes will continue the tradition of excellence established by the former Junior All-Americans who have played previously.

Congratulations to William Hughes from your friends at Kentucky Prep Gridiron, remember to go down to Dallas, have a great time and definately PLAY THROUGH THE WHISTLE!

The following are former Bret Cooper All-Americans who are playing college football or have received offers: