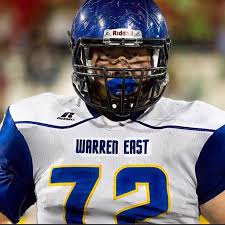 Warren East Head Coach, Jeff Griffith, who for years Coordinated the Defense at Bowling Green High School before leaving the Purples to take a head job, has done a fine job turning the Raiders around, quite admirably, from the team which finished 3-8 last season. After going 3-7 last year during the regular season, the 2016 Raiders bowed out to the HHS Tigers 54-0 in the first round of the playoffs. The Raiders finished this past regular season 6-4 before losing to the Tigers, for the second consecutive year, but this time 21-7. The 2017 edition of the Raiders bore scant resemblance to the 2016 edition and much of that is attributable to its Head Coach. Griffith is turning it around at Warren East, and with the facilities and support the Raiders enjoy, it won’t be long before they will be a power in the 4A Classification, or at least that is what we predict here at Kentucky Prep Gridiron.

One weapon Coach Griffith has at his disposal is a 6’2″ 280 pound grown man playing along his interior offensive line and doubling as an inside technique on the defensive front. His name is Matt Mellancamp and the big redhead, who also plays baseball for Warren East, is quite a specimen, as one can readily tell looking at him in his baseball uniform. Matt wears number 72 on his football jersey and there is film upon film of him getting down hill in the run game and driving defenders deep into the defensive second and even third levels. Additionally, he is, depending on the situation, a heat seeking missile defensively penetrating into the backfield or, when the need arises, an immovable object scraping up and down the line of scrimmage making plays. Looking at his reported strength, speed, and agility numbers (and we have no idea the last time the numbers were updated), one gets a fair impression as to why his play has been so stellar. The 2016 Offensive Lineman of the Year for Warren East, and someone who would be a good bet to repeat, benches 285 pounds but back squats an impressive 500 pounds to go with a 40 yard dash time of 4.89 and a pro-agility shuttle (5-10-5) of 4.6 seconds. Now, HHS played Matt in the first round of the playoffs this past Friday night and I got a good opportunity to look at Mellancamp both in and out of uniform. It would shock me if Mellancamp’s bench press and weight aren’t both old numbers and that his strength and weight numbers are significantly higher now. I can tell you that Mellancamp looks like a man among boys. He has excellent burst, punch, and creates easy separation and really brings his feet when he is locked on Defenders in the Raider run game. I, for one, thought his play was a real bright spot on an otherwise poor showing by the Raider offense against what has become a very skilled, fast, disciplined, and stingy Tiger Defense. I don’t know calling the Raider offensive showing poor against Hopkinsville’s defense is fair criticism as lots of offenses have looked poor against the Tiger Defense this year, especially lately.

Watching Mellancamp this past Friday night, it would appear to me the Raiders staff believes him to be an Offensive Guard primarily. While I can’t deny he is fantastic at that particular endeavor, I would think a 280 pounder who runs a sub 4.9 second 40 yard dash and shuttles in the mid 4’s could well play Defense at the next level too. I haven’t been able to find out whether there are any schools on Mellancamp, but if there aren’t, I would think it might be because he has been playing baseball in the Spring and some of the Summer instead of going to exposure camps. I don’t know what kind of baseball player he is though I have heard WE really has a great baseball program. His profile indicates he played JV ball as a sophomore, so I would gently suggest to the young lad, should he ask me, that, obviously, he’s a better football prospect than baseball or else why would he be a JV baseball player in the 10th grade?  All of that aside, I can tell you this…he is a Division I football prospect and one that should be drawing interest on the FBS and FCS levels. If he would like to piddle that away, I guess he can go play some more Junior Varsity Baseball, but that wouldn’t be my recommendation.

This is Fletcher Long reporting for Kentucky Prep Gridiron reminding you to PLAY THROUGH THE WHISTLE and congratulations to this Week’s Independence Bank Revolutionary Player.