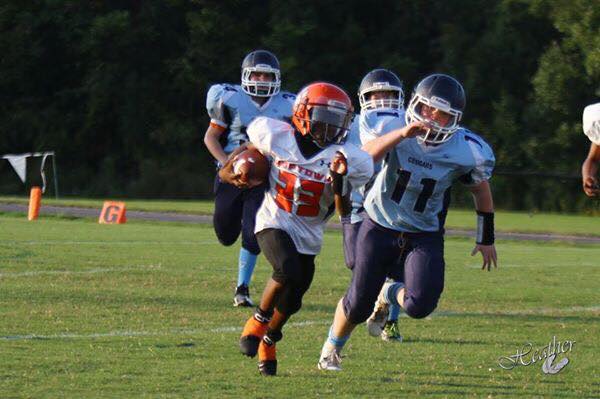 Well it was a year in which HMS made tremendous strides over the course of the year. There really can be no question the Tigers underwent great improvement over the course of the season and, in the end, played an always tough TK Stone team much closer than the final margin of 32-16 would indicate. Tiger fans, especially fans of the HHS Tigers, have every reason to be excited about this class of eighth graders and what their respective talents mean for the future of the high school program. In this article we intend to focus on the year as a whole and some of the incredible individual development undergone by some of the players.

No where did the Tigers improve on the year any more drastically than it did running the football. If there is anything football consistently proves it is no team really can play at a very high level without the ability to gain yards from scrimmage on the ground. It eats clock, controls the ball, limits the opponent’s scoring opportunities and possessions and allows the team, able to do it, to control and dictate tempo and dictate what your opponent must run on both sides of the ball. Obviously, the improvement running the football has to be lain, at least to some degree, on the big boys upfront, as well as lead blocker, fullback Isiah Manning, but one really can’t down-play the improvement both Daisjaun Mercer and Jaron Mills underwent over the course of the year. All-State candidate Jacob Bealle, as a true dual-threat QB, also helped establish a credible run game for the Tigers the credibility of which was often found lacking in its earlier efforts.

Now, when HMS played Christian County, the first time, and lost 30-0, I believe it was reported the Tigers managed very little net production on the ground the entire game against the Colonels defense. By the time the Tigers faced 3rd seeded, Franklin-Simpson, in the KHSAA playoffs’ second round (both teams had a round one bye), it was a much different story. Daisjaun Mercer rushed for 201 yards on 14 carries against the Wildcats with 3 rushing TDs and Jaron Mills contributed 95 yards in 9 carries with a rushing TD. These type efforts from Mills and Mercer, together with the running from its QB position by Bealle, became just another day at the office for the Tiger ground forces as the season matured. It constituted the major reason the Tigers became a very tough draw for any opponent having to face them late in the season.

Coach Robert Stinson deserves a lot of credit with what he did with the Defense over the course of the season as does Coach Keno Brown, who worked the back-four defensively and helped with the offensive play calling toward the end of the year. Corner, Trushaun Matt was outstanding all year long but the development of Jamari Meadows, a.k.a. Moochie, was a spectacle to behold. Moochie at 6-2 and nearly 200 pounds always looked good getting off the team bus but this was his first year playing organized football and, at the season’s beginning, he couldn’t get in a stance, much less do something thereafter. The work with Meadows to develop him into the player we saw finish this year was a year-long project for Coach Stinson which paid huge dividends down the stretch. By the TK Stone game in the Region I, Division 2, semis, Moochie was a problem for opposing offenses and made a ton of tackles for loss over the course of the second half of the season.

QB Jacob Bealle came into the year having never before played QB. At the first of the season, he looked as comfortable at QB as Moochie looked in his stance. However, something which paid dividends as the team progressed through the year and for whatever Bealle lacked in QB polish, he made up for in raw, football-playing-ability. Bealle, under the careful and consistent guidance of QB coach and guru, John Faulk, really made pronounced improvement both in his decision making with the football and his mechanics. At the first of the year he was a football player aligned at QB; by the end of the year against TK Stone, he had rounded into a legitimate, All-State caliber, 8th grade QB of whom coaches across Kentucky, particularly coaches for Team Kentucky, had started taking notice. The combination of Bealle to Mercer became a down-the-field threat as the year went along and Bealle, with his athleticism, was able to get his team out of trouble when his protection was too yielding.

So a team which opened the year losing by an embarrassingly large margin to a very average Caldwell County Middle School team ended the year on a hot streak, beating a good Christian County Middle School team late, beating Mayfield and Graves County, beating Franklin-Simpson, and giving both Logan County and TK Stone all they wanted with both games very competitive, deep into the fourth quarter. We would note both Logan and TK Stone scored cosmetic TDs on the Tigers making both games falsely appear less competitive then they actually were. So, on the year, the Tigers finished 6-4 and were bounced from the playoffs earlier than it had ever before been. However, that really doesn’t tell the whole tale as these Tigers made tremendous strides over the course of this season. Congratulations to the HMS Tigers on quite a ride and giving Tiger fans many reasons for optimism concerning the Tiger program’s future.

October Call-ups; In what amounts to a tremendous honor, several of the 8th grade players, whose season ended Saturday with the Regional semi-final loss at TK Stone, have been called up by Freshman, Head Coach, Jacob Ezell to finish this year on the Freshman roster. A call-up to the Freshman roster is quite an honor and signifies the high school program’s excitement about beginning the development process for certain players whom the high school believes likely to figure into its program’s plans as early as next year. The following players have been called-up to the 9th grade football team: Bryce Rea, offensive center; Jamari Moochie Meadows, DE/DT; Jaron Mills, RB; Daisjaun Mercer, DB/WR/Slot; Isiah Manning, LB/FB; Jacob Pryor, LB/TE; and Jacob Bealle, QB/Ath.