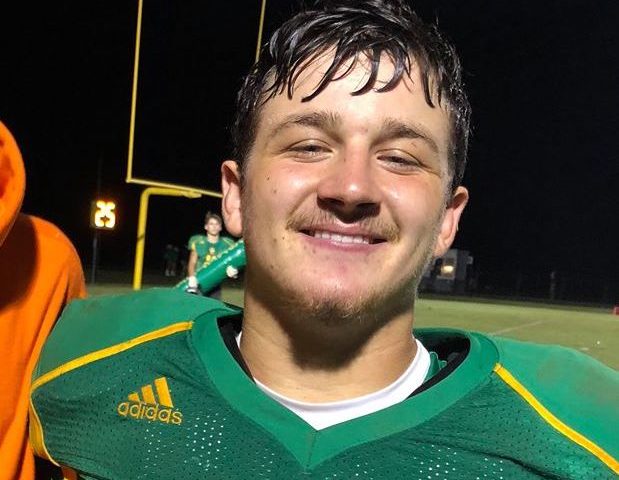 All across Kentucky there are guys winding down their high school football careers. For all but about 5% of them, they will never play another down of football after this season. After reviewing quite a bit of film on Class of 2019’s Alex McNutt, we can’t help but think there is a college or university somewhere which would greatly benefit from adding this monster to its roster. We know for certain Greenup County is happy he hopped on board its ball club this year.

Alex McNutt has a good frame on which he could stack on quite a few more good pounds. He’s listed at 6-1 and weighs 185 pounds and played for Raceland High School before relocating to Greenup, Kentucky and joining its football team, gaining eligibility four games ago. We aren’t sure what the young man’s forty time is, how quickly he negotiates a pro-agility shuttle, in what amount of time he completes the L-cone drill. We can’t give you his bench press, power clean, back squat, deadlift, vertical leap, or broad jump. We don’t have any power, explosion, or speed numbers on this prospect at all. However, what we have at KPGFootball is eyes. Our eyes tell us he will knock the tee-total crap out of an opposing player before the victim can cry out for help. I am linking a video of McNutt running down on kick coverage for Raceland High School, when he played there. Now, while McNutt will wear number 34 for Greenup County High School tomorrow night; he wore number 14 at Raceland, so look for number 14 in this video and watch what he does to the kick returner. Video.

Did you see it? Did you wince? Somebody tell me the returner whom he struck like a car hitting a deer on an interstate got up unscathed from that hit. I know I was very scathed just from watching video of it. I believe I was concussed just watching the play. Go back (if you have the stomach) and watch it again and notice how he accelerates about the opponent’s 35 yards line and zeros in on his target, striking him like a heat seeking missile hits an enemy military barrack. That hit, and I have seen many more on film sent to me by his mother, is intimidating, has the ability to change the momentum of a football game, is intimidating as Hell, and is why we believe there has to be someplace for this kid on a college roster somewhere.

I used to call football on the radio, play by play, for a tiny 600 watt frequency in Springfield, Tennessee. I remember, when working as the Voice of the Springfield Yellow Jackets (TN), Springfield had a player like McNutt I called Big Play, Josh Bey. Like McNutt, Bey was what football coaches call a tweener. A tweener is a player whose size and athleticism make him too small for the position for which he has the speed and quickness to play while not being quick and fast enough to play the position for which he is big enough. For Josh, he wasn’t really big enough to play DE, in college like he had done so well in High School, and was neither fast nor quick enough to be an OVC, OLB, or so was the thinking of many coaches around the league when Josh was matriculating to college. The coaches at UTMartin saw a hitter and a football player in Josh Bey, so they took a chance, offered Bey, and created things for him to do which greatly improved the UTMartin defense while he was on the team. Martin was willing to take a chance on Bey because Bey’s high school highlight film was like McNutt’s. The highlights were full of hits which made you have to change position in your seat because the collision made you that uncomfortable. UTMartin took a chance on Josh Bey. Bey richly rewarded the Sky Hawks by maturing into the most dynamic playmaker on the Martin team and, not just on Martin’s team, but in the entire conference. Josh Bey routed into a two-time, OVC, Defensive Player of the Year.

Now, is KPGFootball saying if a school takes a chance on Alex McNutt the school will get the same return UTMartin realized with Big Play Bey? Well, there would be no way for us to accurately forecast that with any certainty. No telling how much money KPGFootball would be worth if we could make similar guarantees to schools like UTMartin which came to fruition. What we are saying is this…Alex McNutt is a football player who doesn’t hit opponents, he demoralizes them. He has only played in four games for Greenup this year and, already, he has 25 tackles, 18 solos, one sack and recovered a fumble while forcing 3 of the team’s 8. We are saying people around Greenup, Kentucky have limited additional opportunities to come out and enjoy watching him completely cream opposing players. We’re telling you it is easily worth the price of admission to get to see it, I mean many of you pay to watch demolition derbies, right? Finally, KPGFootball is telling you there is always a place on a roster, even a D-I college roster, for players who hit like Alex McNutt.