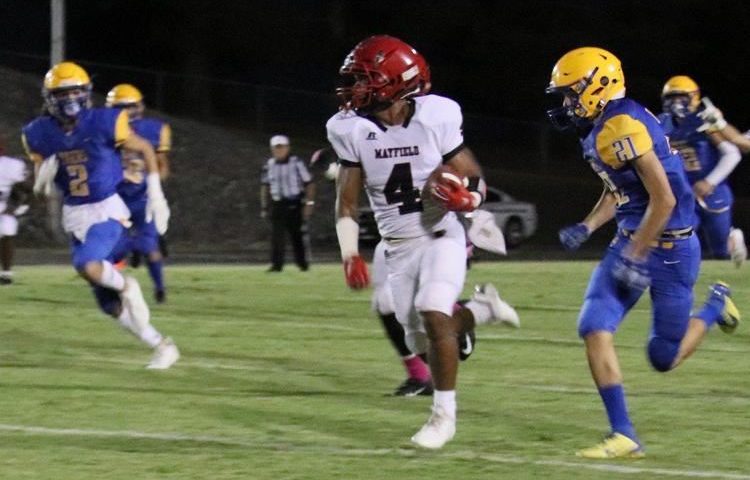 What do you do when you were ranked the number 4 player in WPSD’s “Gridiron Glory” series entering the pandemic shortened ’20 season, rushed for a career 2,827-yards on 405-career carries with 30-career rushing TDs, and have signed to play for the Reigning NAIA National Champions, Lindsey Wilson College? Ky Galbreath comes back to play another year, under SB-128, for the Mayfield Cardinals.

Kids in Mayfield, Kentucky grow up believing nothing is better than playing for Mayfield High School. They aren’t alone among bluegrass football programs.

The Belfry kids feel the same way. The Boyle County kids do too and many other prep players across Kentucky who have the privilege to play for programs of that ilk.

Now we didn’t hear a formal announcement Ky Galbreath is coming back for another year. That doesn’t mean he didn’t make one, just that we obviously missed it.

What we saw was information as accessible to you as it is to us. We checked his Twitter account.

Who could blame Galbreath for returning? He only got 6-games of action over the abbreviated ’20 season. He gained 511-yards on 110-carries and scored 7-TDs to lead the Cardinals in rushing and scoring. He was third on the team in tackles from his LB post.

The last time he got to play a real season, in ’19, he acquitted himself both very well and more in line with his abilities. Galbreath in ’19, gained 1,575-yards from scrimmage, had 18-rushing TDs, was second on the team in scoring, and made the All-State football team.

Galbreath reports four offers. The only thing shocking about this, to us, is we would have figured fourteen instead of four.

Now we don’t have a clue what will be done with the stats from ’20 where a kid elects to come back and reclassify in ’21. Will they throw them out or keep them? This may have been reported on as well, and much like Galbreath’s reclassifying, we just missed it.

We have seen where the NCAA has elected to only count a prospect’s first eight semesters on his/her transcript to determine Division-I eligibility for Clearinghouse purposes. Will the KHSAA follow suit regarding football statistics?

NCAA clearinghouse eligibility shouldn’t be an issue with Galbreath. He has already reported a qualifying test score and carries a 3.6 GPA.

Speed shouldn’t be much of an issue either. Galbreath is a sprinter on Mayfield’s track team, runs both the 100 and 200-meter sprints, with a personal best 11.78-second, 100-meter time.

That being said, even were you to take his 511-yards gained in ’20 off his 2,827-career yards, and have him entering a full “re-do” season with 2,316-yards, you’re still looking at a kid who may hit 4,000-career rushing yards and career TDs in the low 40s before ’21 is in the books. Thanks to his coming back, and with Jax Rogers now fully healthy and available, you may also be looking at another run to Lexington, Kentucky.