Okay, I am far from unbiased. My son played last year on the victorious East squad at the Bret Cooper Junior All-American Football Classic which is part and parcel to the Cotton Bowl played each year in Dallas, Texas. For his efforts last year, William Long, a newly minted AFI-KPG Freshman All-State Football player now a year later, was awarded the prestigious JJ Watt Award for outstanding Defensive Player during last year’s game. Yes, I am on the coaching staff, again this year, and coaching the offensive line. Yes, I have another player who has studied the fine points of offensive line play, under me, who has made this team in William Hughes, Class of 2022, as an interior offensive/defensive lineman. All of the above being true, I must confess amazement at the loaded coaching staff which will be leading the East team’s efforts this year at what is, in my mind, the most prestigious Junior All-American game in these United States. I am not going to feature the entire staff, but I would like to feature the Head Coach and Offensive Coordinator and this year’s Defensive Coordinator for the East Team who both have impressive All-Star playing and coaching résumés. Allow me to make the introductions…

A guy that is back for more this year is the man who put together the winning staff and served as the Head Coach the year previous, Head Coach Glenn Campbell. Campbell has a long history coaching football in All-Star games. He helped launch the FBU programs in both Tennessee and Kentucky, was the Head Coach of the United States’ National Team in the World-Wide Athletics’ Puerto Rico San Juan Shootout, has coached Team Edge in the Las Vegas, High-Rollers Game and has scouted talent selected to the United State’s Army All-American High-School Football Game. Coach Campbell was the head coach of last year’s East All-American team, following that up with being chosen Offensive Coordinator for the 8th grade Tennessee Future Stars team in the annual Tennessee-Kentucky Future Stars Classic played this past July in Clarksville, Tennessee at Fortera Stadium on the campus of APSU. For an idea how the East team performed in last year’s game under Coach Campbell’s direction a video of the game from Lancaster High School in Dallas, Texas as been herein provided as it was broadcast over YouTube: https://www.youtube.com/watch?v=6KBNY-L3gkM. Campbell has over a decade experience as a High School football Head Coach, including being the Head Coach of a Martin Westview team in 1989 which went 11-3 before losing, in the State Semi-finals, to National Powerhouse, Brentwood Academy, out of Nashville, Tennessee. That 1989 Chargers team, under the direction of Glenn Campbell, who was only in his second year as a Head Coach at the time, is still considered special for making such a splendid, and somewhat unexpected, playoff run coming off a regular season where the Chargers were runner-up in the district to Milan High School, and lost to two district opponents during the year. That team was the first in Westview’s history to go to a State tournament in any sport and established a tradition for years to come at Westview which saw it ultimately finish as a state runner-up in 2001. Glenn Campbell is still coaching football in Greenbrier, Tennessee devoting himself to what has amounted to his life work of making young men better men and better football players. 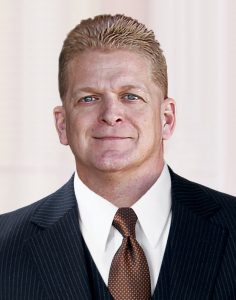 The Defensive Coordinator for the East Team was someone who played football at a very high level both in High School and taking his talents to the SEC for the Kentucky Wildcats. Kelley is the all-time, career tackles leader at Hopkinsville High School, for which he had 497 career tackles in spite of not being a starter until half way through his sophomore season. Basically, Kelley tallied 497 tackles in only 2 and 1/2 seasons of playing time, a staggering figure should you give it much thought. Kelley was selected a High School All-American for his efforts his senior year, played in the Tennessee-Kentucky High School Football All-Star Game which used to be played annually between the two states and, then, took his playing talents to the University of Kentucky where he played from 1987-90 before being derailed by injury. While in graduate school, Kelley was a Graduate Assistant Football Coach for the Kentucky Wildcats from 1990-1993 and has coached various levels of Youth/Middle School football for 8 years in Clarksville, Tennessee, winning numerous championships. In recognition of his outstanding coaching expertise, Coach Kelley was selected, just this past summer, as the Defensive Coordinator for the 8th grade Team Tennessee Future Stars in their annual battle with Team Kentucky in the Tennessee-Kentucky Future Stars Classic. In 2004, Kelley’s No. 49 was retired by his High School alma mater, making him a second generation Kelley to have his high school number retired by the Prep Teams for whom they starred, as his father Wayne’s number was retired by Caldwell County High School in neighboring Princeton, Kentucky.

Two Kentuckians played in last year’s game, Austin Gough from Owensboro and William Long from Hopkinsville, and both relate it was just a fantastic experience.  This year’s game should be no different. This if Fletcher Long, reporting for Kentucky Prep Gridiron reminding all players, East or West, to remember on December 31, 2017 to…PLAY THROUGH THE WHISTLE! 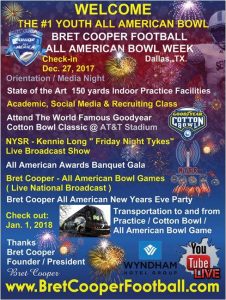