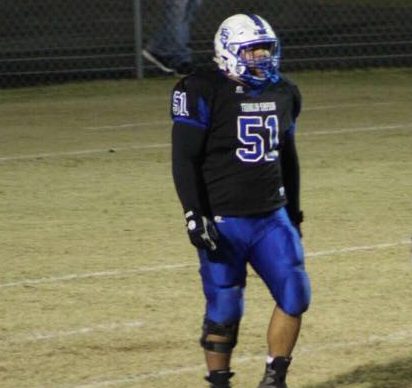 It is hard to put into words the terror interior offensive linemen across Kentucky experience knowing they will be aligned across from Dion Pearson from Franklin-Simpson High School. It reminds me of some of my favorite stories about Doug Atkins, who, for 17 years, terrorized the NFL playing some 12 of those years for the Chicago Bears. Jim Parker, who was once considered one of the best guards to ever play NFL football, once said he never met anyone meaner than Atkins and after his first meeting on the field, against Doug, he claimed he wanted to quit football. Parker was dissuaded from doing so because his coaches convinced him not every pro player was Doug Atkins. Then there is the legend that a rookie member of the Los Angeles Rams had been called for holding Doug and the veteran next to him, in the huddle, ordered the rookie to go back up to the line of scrimmage and apologize to Mr. Atkins because the veteran was going to have to play against Atkins the rest of the day and didn’t want Doug mad at him for what the rookie had done. Perhaps the most famous legend is about the tackle who told a sportswriter not to print anything about his having handled Atkins that day because he didn’t want Atkins mad at him. He told the writer that if he put something in the paper which enraged Doug, Doug might just kill him the next time they played. I know Doug Atkins and Dion Pearson play different techniques, but the sense of dread, to outright horror, each engenders in his opponents is similar, at least from where I sit.

Nose guards/Nose Tackles are required to be dynamic players who possess overpowering strength, quickness, instincts, and understanding of the game. I was doing some research in order to write this feature article and read something to the effect authored by Steve Silverman, the link for which I provide here: https://www.livestrong.com/article/535190-what-is-a-nose-guard-in-football/. In an odd front, where a nose would be used, the primary responsibility of the nose is to disrupt the opponent’s interior running game. Silverman, Id. Nose guards are noted for strength and bulk but are best served with quickness allowing them to make key plays and effectively rush the passer from his most glaring point of vulnerability…right up the middle. Now, I can’t imagine why this is, but when I went to find Hudl highlights for Pearson, I didn’t find anything more recent than his sophomore year. That isn’t because it was the pinnacle of his playing career, as I have personally seen him play, both when he played HHS in the State Quarters, this year, and in the State Championship Game against Johnson Central just this past week-end. His play was so impressively dominant it resulted in this feature article. What I saw was an unstoppable and overpowering running game disruptor and passing game destructor. See for yourself, from two years ago, remembering he has only improved: http://www.hudl.com/profile/4397022/dion-pearson. Editor’s Epilogue, after publishing this article, the player’s mother send to me the Senior Highlights for Pearson. I attach them now so you can compare and contrast his play from his sophomore year to his senior year to see his progression: http://www.hudl.com/v/28QAv5

Dion Pearson is listed at 6’1” 285 on the Franklin-Simpson roster and his listed 285 could well be a modest assessment of his true thickness. He is noticeably thicker than everyone else on the field. I had an opportunity to have written discourse with the Strength & Conditioning coach at Franklin-Simpson, Max Chaney, about Pearson and he said Pearson is the strongest kid that I have coached. Notice the absence of a qualifier…one of…in that description. Very hard to get a coach to earmark a player as the strongest without his qualifying it with a one of the strongest type of backstep, but Coach Chaney didn’t do that here. He was definitive that Pearson was the strongest kid he had ever coached. Pearson tore his ACL, last season, during the State Semis against John Hardin and played the entire game, and the week after, against Johnson Central. Pearson never complained of pain and rested it a month before coming back to lift January of 2017 where he performed dot drills and 1 legged squats on the leg with the torn ACL. Pearson then underwent surgery. So, the only power numbers we have on Pearson is from immediately following his sophomore season where he back-squatted 500 pounds, deadlifted 600 pounds, and power-cleaned 290. He has benched 400 pounds, this year, and repped the NFL combine, bench press, rep weight of 225, 20 repetitions. In May of 2016, he ran a 4.82 40, 4.90 shuttle, and had a 21 inch vertical leap.

All of this begs the magical question, is he 100% recovered from his surgery? Well, from the eyes of this reporter, it would appear so. At the very least, it is a question for which I would seek a definitive answer, if my job depended on finding players who could help my University succeed on the field of play. In the games of his I saw, what I viewed was someone who was completely unblock able and who seemed to just take over the game inside. Pearson was someone both at whom and from whom it appeared impossible to run. He played with low pad level and had his shoulder pads underneath the blocker’s pads constantly pushing the offensive lineman deep into the offensive backfield both disrupting and clogging running lanes. Pearson does very well finding the ball carrier and tackles many of the ball carriers before they have even the slightest chance of making a play or gaining a yard. He is at his most devastating pressuring quarterbacks right up the middle and either sacking the QB or flushing him from the comfort of his pocket. QBs I saw him flush, from the pocket, appeared to me more concerned with avoiding destruction than finding downfield receivers who may have come free. Now, I haven’t seen the stats from the Championship Game, in which Franklin-Simpson won the crown over Johnson Central 35-21, but through the first 14 games, Pearson had 80 tackles with 56 of those being solo tackles. He had the fourth most tackles on the Defense, this season, from the nose or inside technique when aligned in an even front. That is just incredible play from a position and a player who constantly drew double and, sometimes, triple teams. I can promise you this, teams may have thought they were going to block Pearson with just the Center, but that never succeeded, and the teams who tried it went away feeling dumber for even entertaining the notion.

This is a player whom I am told by his Head Coach, Doug Preston, is an academic qualifier with a core GPA and test score making him immediately eligible for admission into college. If I were a coach in charge of recruiting the Commonwealth of Kentucky, I would make it my business to find out all I could about this player, but then again, only if my livelihood depended on winning games on Saturdays. Maybe, that is just me.