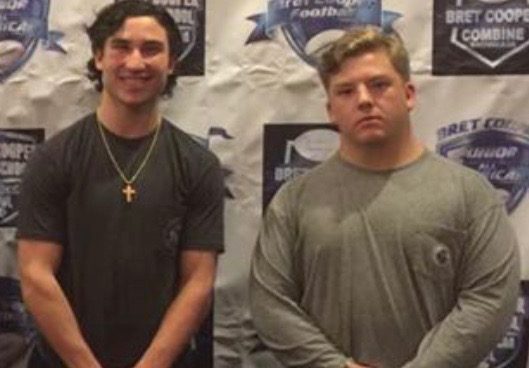 Well, at the end of the month, the Bret Cooper Junior All-American game will be played as part of the Cotton Bowl Classic in Dallas, Texas. Two Kentuckians played in the game last year and both of them really showed out well. Austin Gough played LB on defense and RB on offense and, offensively, he gained about 150 yards from scrimmage last year running behind William Long who played along the offensive front. Defensively, Long also played MLB, right next to Gough, and played it well enough, during the week, to garner the prestigious JJ Watt Award for the outstanding defensive player. Gough didn’t win the Game MVP, but as a member of the East coaching staff, had he, it would have been well merited. Gough would win Offensive MVP of the Tennessee-Kentucky Future Stars Classic later in the Summer in a game in which Long and he reunited, one last time, as teammates before going separate ways to play their freshman seasons. As a how did the former Junior All-Americans play this year type of thing, I thought I would share this article detailing the incredible freshman campaigns which were foreshadowed this time last year in Dallas. We will start with Austin Gough…

Austin has really developed in the weight room, as he is presently bench pressing over 275 and back squatting in the neighborhood of 400 pounds. Austin’s speed, power, strength, explosion, agility, athleticism, and quickness this season appeared to many to be Beowulfian. Something you have difficulty measuring, though, but which showed in Austin’s play, this season, was his Football IQ. Very few freshmen have any, at all, but that was something we saw in Austin’s play this year for Owensboro Senior High. Austin has been hand timed in the 40 between 4.7 and 4.8, performed as a triple-jumper in Track & Field, together with being the Turbo-javelin State Champion, and was a standout in basketball and baseball. For the Red Devils defense this year, Austin led Owensboro with 82 tackles, 58 of which were solo, which led the entire Owensboro defense. Gough not only registered numbers like that but he did it at one of Kentucky’s winningest, all-time, football programs. Gough was widely considered Kentucky’s best linebacker in his Class for his play, this past season, and made the Aspirations Fitness Institutions/Kentucky Prep Gridiron (AFI-KPG) Freshman All-State Football Team as a linebacker. The AFI-KPG Freshman and Sophomore All-State Football teams are the only official All-State Football teams for the Freshman or Sophomore classes. Austin’s play, as a freshman this year, surely showed why Austin was selected to play in last year’s All-American game. He played like an All-American. Austin’s freshman highlights: http://www.hudl.com/v/2880bY

When William Long, last year’s JJ Watt Award recipient, was being discussed for inclusion on the AFI-KPG Freshman All-State Team, the committee heard a story which seemed to sum up the William we all saw at last year’s event.  With HHS playing Franklin-Simpson in Franklin, Kentucky in the Regional Championship (State Quarter-finals) game this year, All-State QB, Jay Bland play faked to the dive, rolled to his right and found a streaking Gavin Marshand over the middle of the field for a TD, the first of the game. What no one other than probably football coaches noticed is the freshman LG, William Long, pulled play side and engaged a backer coming up to get in Bland’s face in the open field. Long covered up the LB, and the pressure never arrived, leaving Bland free to find his open receiver. After the game, my son William said, Dad, I could have pancaked that kid but I didn’t because I knew the play would score and I didn’t want to give the official any reason to flag me and cost us a TD. To a selection committee full of football coaches and enthusiasts, it was both impressive and why William Long may have been considered, by the committee (I was told), the very best interior Offensive Lineman in Kentucky’s 2021 Class this past season. I am also informed it didn’t hurt William’s candidacy that he is, both widely and generally, regarded the strongest and one of the quickest kids at the position in Kentucky’s 2021 class. Long bench presses 3 plates, or 315 pounds, though just a freshman (video link of the lift: IMG_1009.TRIM) and back squats nearly 450 pounds. He is a kid who blocks multiple levels in the run game and is accomplished at both pass protection and picking up stunts and blitzes. William called the O-Line run blocking assignments and pass protections for Hopkinsville High School all year and logged a whopping 49 quarters of Varsity football as a freshman. In weekly film study, Long consistently graded out toward the top of the Tiger offensive line. William played so well this year that most opposing coaches and news outlets covering the games didn’t realize No. 50 was only a freshman. In an article published on this site on September 14, 2017, William’s position coach at HHS and a member of the Bret Cooper East All-American coaching staff at last year’s event, Jacob Ezell, said William Long is very rare. I’m proud to be his position coach… and a faculty member at HHS, himself having formerly coached offensive line, and having been on the faculty at HHS for ten or more years, related that William Long is the best freshman lineman I have seen since coming to Hopkinsville High School. William, like Austin, used his Bret Cooper experience to catapult into one fine freshman season. William’s freshman season highlights:  http://www.hudl.com/video/3/8054289/5a1b1b1f15f6331130abd9eb

Well, this year’s game will have its own stars and will, once again, showcase the very best talent available in the 8th grade, or Class of 2022. I can’t wait to be there to cover it and coach on the East sideline again this year. One thing is sure, if this year’s game translates to as much freshman success for this year’s players as it did for Gough and Long, there are going to be some High School coaches both surprised and pleased with what they have coming into their High School program as freshmen. This is Fletcher Long reporting for Kentucky Prep Gridiron reminding all the Bret Cooper All-Americans to PLAY THROUGH THE WHISTLE!

Video of Gough and Long’s play for the East Team in last year’s classic: https://video.search.yahoo.com/yhs/search;_ylt=A0LEViwDESpaYhoA.2sPxQt.;_ylu=X3oDMTByMjB0aG5zBGNvbG8DYmYxBHBvcwMxBHZ0aWQDBHNlYwNzYw–?p=Bret+Cooper+2017+Junior+All-American+Game+in+Dallas&fr=yhs-Lkry-SF01&hspart=Lkry&hsimp=yhs-SF01#id=4&vid=fad8a28c7731091103fe5bfaf5c0cc2f&action=view