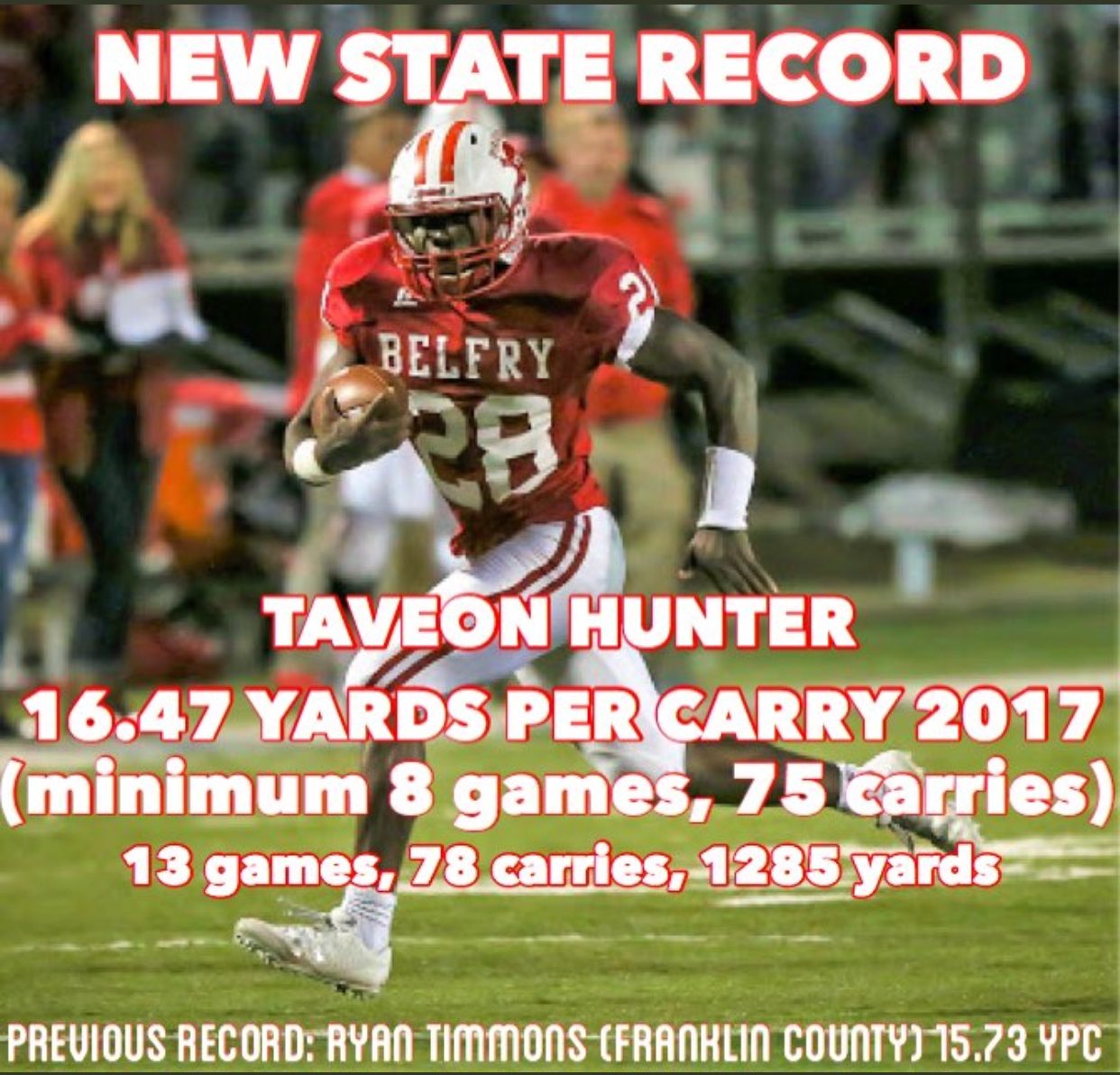 It’s not every day you are privileged to get to write about one of the most dynamic athletes in all of Kentucky and relate an inspirational story on top of it. Without his incredible back story, Taveon Hunter is still a Division I, college football prospect based just off of what he can physically do, but the back story adds an element on which I don’t commonly get to comment. Taveon was a seventh grader who had, for all practical purposes, lost both his father and mother. Taveon lived with his grandmother, some, together with whichever neighbor who had a home at which he could grab a bite to eat and find a couch on which to sleep. He played football with a young man named Grayson Cook and Grayson’s father, Mark, was on the Coaching Staff of Team Kentucky FBU. Yes, Taveon made the FBU team, but that isn’t the story. The story is that Coach Cook got a call from a, then, seventh grade Hunter asking if it would be okay to stay with the Cooks for a while. After about a month, and with no contact from anyone inquiring about where Taveon had gone, Coach Cook and his wife asked Taveon whether he would like to live with them on a permanent basis. Taveon smiled and said, in a very Blindside fashion, I thought I already was. That was six years ago, and the Cooks have been his legal guardians and have reared Taveon ever since. For the past six years, Taveon has been treated and loved, equally with the other Cook children, and seen no differently in the Cook household as anyone else. Coach Cook told me they are all about equally spoiled. I am going to relate the incredible athletic accomplishments about one of the mountain’s best kept secrets but I would like to also marvel that this young man, who had every excuse to turn out poorly, today is not just a football star, but a student with a 3.4 GPA and a 20 on his ACT, plenty good enough to make him instantly eligible for any team who would be fortunate enough to gain his signature. While the 20 is plenty good enough for colleges where he might play, it isn’t good enough for Taveon, as he is set to re-test.

Taveon, this season, played running back and only carried it 78 times in Belfry’s 13 football games. In spite of the limited number of carries, 6 per game, Hunter still gained from scrimmage 1,285 yards rushing with 15 rushing TDs. That is a newly minted State, per carry, rushing record of 16.47 yards per attempt, with a minimum of 75 rushes required for record consideration. Hunter scored a rushing TD for Belfry about every 5 times he carried the ball. He also had 5 TDs receiving, out of the backfield, on top of the 15 he scored the old fashioned way. Surely, one would suppose, the East Kentucky team in the Best of the Bluegrass High School Classic would be playing him, this weekend, at RB, right? How do you not play the running back with the highest yardage per carry average in high school football history at the position at which he achieved the record? Well I suppose if he were, let’s say, an even better prospect in the defensive backfield. Whether or not Taveon or the Cooks want to hear this, I believe Taveon’s future in football is at corner. Allow me to tell you why that is.

Now, if you follow the site, you know we just published our AFI-KPG freshman and sophomore All-State Football teams. We just didn’t splash a bunch of names on the list, we defended every single selection and set forth exactly what about the player’s play warranted his inclusion. We also, at the beginning of every position group, included the skills for which the selection committee was searching in All-State players at the respective positions. For corners we put the following…in assessing corners, the selection committee looked for athletes with great feet, change of direction, body control, and loose hips. In watching film and highlights, we looked for corners with quick back pedal, who stayed low and could flip their hips without losing much speed. We attempted to identify corners who transitioned very quickly. By transitioning, the committee looked for corners who could go from a pedal to closing on the ball seamlessly. The quicker a player is in transition can mean the difference between a pass completion and a pass breakup or interception. The selection committee believed an ideal corner plays press, off,and zone coverage equally well. Emphasis Added.

Breaking it down into prominent attributes, we wanted corners who were athletic, quick, explosive, fast, and agile. Corners are among the best athletes on a football team, if not the very best. Hunter camped at both EKU and Lindsey Wilson, last summer, and was hand-timed at 4.4 and some change in the 40 yard dash. As we have before discussed, vertical jumping ability, hip explosion, and running speed all correlate. Further, truly fast, 4.5 or faster, types in HS will be sprinters on the Track team. Let me throw some numbers at you. Hunter has a vertical leap which has been measured at 40 inches. Taveon plays basketball too and, at 5’10” tall, he has jumped up and touched the top of the square on a ten foot goal, having to turn his head away to keep from hitting it against the rim. Tavion has broad jumped out of the sand box when tested for hip explosion. Hunter broad jumped 10′, 8″, or 128 inches and turned in an 11.1, laser timed, 100 meter at the UT Martin Track Meet. Putting that in perspective and for purposes of comparison, on May 8, 2004, when a senior in high school, NFL RB Chris Johnson ran a personal best (to that point) 10.66, 100 meter time. We all know Chris Johnson is now considered among the fastest players to ever play professional football. So, in evaluating whether Taveon possesses the prominent athletic attributes desired in college corners,  here is how KPG breaks it down…athletic, super check; quick, super check; explosive; super check; fast, super check; and agile, super check! Based on everything we look for at one of the most important and difficult positions to find suitable talent at the college level, Taveon Hunter has it all with plenty to spare. We suspect this is why he is playing corner in this year’s game and further suspect it is where he will play in college.

Taveon Hunter is a fantastic kid. Taveon has been reared by a family who loves him very much, and have reared him very well, in spite of their not fitting neatly into the description of family Norman Rockwell would have fashioned for one of his paintings. Taveon Hunter is a state record holder at a key statistic for the running back position, but, ultimately, Hunter has the size, frame, and freaky athleticism to play corner at a high level for years following his days at Belfry High School. This is Fletcher Long reporting for Kentucky Prep Gridiron reminding you to PLAY THROUGH THE WHISTLE!