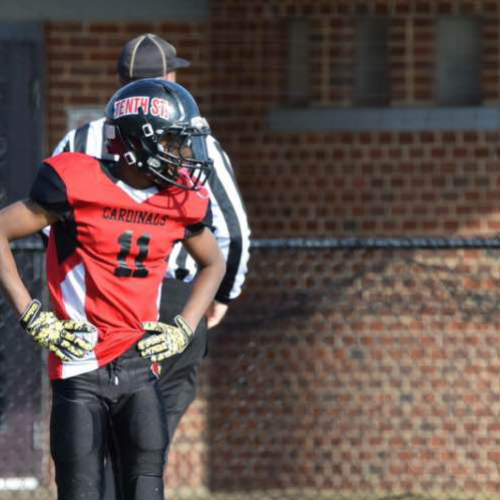 In 1969, the great Satchel Paige was remarking on the quickness of fellow Negro League player, James Cool Papa Bell.  Paige described Cool Papa Bell as being …so fast that he could turn the light out and be in bed before the room got dark. The late Muhammad Ali, from Louisville, Kentucky, also boasted once that he was so fast he could…hit the light switch in [his] room and jump into bed before [his] room goes dark.  Both of those former greats, in his respective sport, were certainly quick, no doubt about it.

Recounting this humorous hyperbole and, particularly about whom it was before used in characterization, has a certain singular connection to why we use it to describe the spacial quickness of running back Desrick Noodie Allen from Louisville, Kentucky.  For one, Muhammad Ali and Cool Papa Bell, like Allen, have either a direct or tangential connection to Louisville, Kentucky. Muhammad Ali and Desrick Allen both come from the Ville while Cool Papa has been immortalized with a bronze statue outside Bush Stadium, which is indirectly tied to Louisville as The Louisville Redbirds were the Cardinals’ minor league franchise for a time. Secondly, we use this particular hyperbole in describing Allen’s quickness because Noodie may really be quick enough to turn out the light and jump in bed before darkness fully descends.

Desrick, or Noodie as he is known around Louisville, is a Diamond All-American because he is a 5’7″ 140 pound scatback who maintains fantastic body lean bursting through the line to the second level and, once there, is able to cut and change direction on a dime. Noodie, who plays for the Tenth Street Cardinals in Louisville, Kentucky, is a 3x Kentucky Future Star and has a 3.0 GPA at Wesport Middle School. The Cardinals program has been a river veined with gold panned by the upper echelon of Louisville High School Football powers for years.

Allen can attack between the tackles and get North and South on a defense before it has time to react. In addition, for what Noodie appears particularly adept, is his skill of scanning the line for creases and then cutting up field and jetting to the 2nd and 3rd levels in an instant.  Noodie leaves the DL, LB corp and back four with broken ankles, grouping air, and falling, oftentimes, to the turf dejected and totally in despair.  It’s like tackling a ghost; first he’s there…then he’s gone.  Noodie and Ethan Mills, who share many similar characteristics, will make the perfect compliment to Kentucky’s power running game.

Remember the name Desrick Allen, Kentucky fans, just don’t be surprised when first you see him, then you don’t!  Oh yeah, remember too ballers…PLAY THROUGH THE WHISTLE!