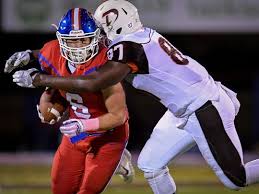 I had the opportunity to catch up with a former Coach from the MLYA named Tim Richardson who formerly coached Doss which became the Spartans in Louisville, Kentucky. I thought I would give some press to the MLYA Champion 10th Street Cardinals and post a free article about their Championship, as no other publication was likely to make any written record of the accomplishment. I have gotten angry posts from parents who didn’t think I had sufficiently covered their son’s play, I even got accused of ripping off some guy who had taken a picture which I ended up not using in the article. Ripping him off? For what exactly? The article was published free of charge, what in the world did I net (other than headache) from using this guy’s picture? Oh well, may never again make that mistake. Sheesh…no good deed goes…well, you know the rest.

Anyway I got to catch up with Coach Richardson who told me that, for his money, Demetri Scott from DeSales High School, is the best player he has either coached or seen. Now, that is quite a mouthful for a guy who won two Rocky Top National Championships, went 5 years without losing a game, won Metro Championships, won the prestigious King of the City Championship, placed 10 players in the Tennessee/Kentucky Future Stars Classic, and amassed an overall record of 135-15 over 8 seasons, including National Tournaments. What is Tim doing now? He has moved on to High School, coaching the Meade County Freshman Team, which is 7-1 this season. Not too shabby.

This got me to immediately access my sources here at Kentucky Prep Gridiron and investigate this fantastic 6’3″ 245 pound DE/TE combo of a 2020 superstar. You know what? I learned Richardson may well be right on the money with his evaluation. Scott is nicknamed Meaty and it would appear appropriate. He is a thick, quick burst, explosive, powerful bolt off the end for a team considered by the MaxPreps computer as the 8th best team, overall, in the Commonwealth of Kentucky. The Colts coach Harold Davis, in an interview with the Louisville Courier-Journal relates that Scott has great size and is a very intelligent football player. From one-handed grabs to tackles behind the line, Scott has been a wrecking ball of an impact player on his team this season.

We here at Kentucky Prep Gridiron believe Demetri Scott is a no doubt future Saturday player and further believe he can end up in college on either side of the ball. Defensively Scott runs to the ball well and uses his extraordinarily large hands and fantastic length to either shed blockers or blow by them completely. Demetri has been described as having a very advance football IQ fully exhibited by his ability to play technique, up front, soundly which is why he makes so many plays defensively in the offensive backfield.

Offensively, Demetri has the speed and length to cause real match-up problems with LBs attempting to cover him over the middle or even down the seam. Demetri is quick too making him a tough cover in the flat with his change of direction and he has both the length and bulk to shield defenders attempting to cover him away from the ball. What we are saying is Demetri catches the ball with his hands extended away from his body like one would want from a TE. He’s just a tough cover and a dynamic playmaker for the Colt offense.

Now DeSales High School plays in the 2A Classification in District 4, but much like Mayfield, the Colts transcend its Classification on the football field. The Colts are 9-0 with wins over 6A Ballard and 6A North Hardin, 5A Fern Creek, and 3A Lexington Catholic, just to name a few. The Colts, through 9 games, have only allowed 91 points this season. I guess what we are trying to say at Kentucky Prep Gridiron is that Scott, who played quite a bit last year as a freshman, is facing really good talent from schools with way more enrollment than DeSales and is shining nonetheless. If there is a better 2020 DE in Kentucky than Demetri Scott, we sure would like to see him.