Yesterday, in the Metropolitan Louisville Youth Association (MLYA) Championship Game in the Senior Division, played at Pappa John’s Cardinal Stadium, the 10th Street Cardinals defeated the Flaget Rams for the coveted Title. The Cardinals, who are among the most storied programs in the history of the MLYA, have boasted such former greats as Michael Bush, Jeremy Johnson, Taywan Taylor, Mister Cobble, and Demarcus Smith. 10th Street was led to the title behind very strong play from RB DeDrick Hamilton who led the 10th Street Cardinals to a MLYA, Senior Division, Championship.  As an aside, Amari McClung rolled his ankle late in the contest but will be just fine. We are certainly glad to hear that. The Flaget Rams have the top 2022 Kentucky prospect anchoring its offensive line in massive LT, Kiyaunta Goodwin. How good is Goodwin? Well, UofL, UK, UGA, and WKU all believe him good enough to pull the trigger and offer the MLYA, 8th grade, superstar. 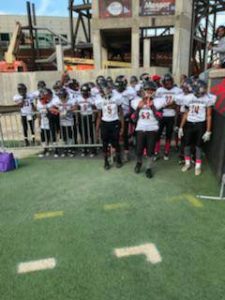 There has been a running debate in the Metropolitan Louisville area for years concerning which teams play the superior brand of football between the two metropolitan area leagues, one of which is the MLYA and the other is the Louisville Youth Football League or LYFL, versus the schools who opt to play in the Kentucky Middle School Football Association (KYMSFA). You may remember that Tim Richardson coached a Spartans Team which won the Metro Championship last year. That Spartans team, formerly Doss, didn’t lose a game for 5 years and beat the LYFL champions, at the end of last year’s MLYA championship run, 39-0 in the King of the City game. Richardsons’ Spartans were also the only team from Kentucky to win 2 Rocky Top National Championships compiling a 135-15 record over an 8 season span. Anyway, all of that running debate aside, and wishing to take no position on that issue, there can be no doubt that the MLYA has produced some of the finest football players and athletes the City has ever had matriculate through its High Schools. As an example, just this year, Coach LaKunta Farmer, Defensive Coordinator at Louisville Ballard High School, has had a true freshman, former MLYA player who played for Coach Ricco Hughes and the PCC Bears as a 12 year old before playing for Kammerer Middle School when 13, start for him at Linebacker. Justice Thompson, the 6’0″ 225 pound MLB who was the Defensive MVP of last year’s 8th grade Kentucky-Tennessee Future Stars Classic in Clarksville, Tennessee, has 72 total tackles, 45 of which are solo, for a team which is presently 2nd in its District (behind Trinity) in Kentucky’s 6A Classification. It should also be noted that Justice Thompson has been featured in numerous articles on this very site and is believed to be one of Kentucky’s very finest in his class at his position. As for Louisville Ballard, they are ranked the 24th best team in all of Kentucky in MaxPreps’, computer generated, Power Rankings and not a team for which you would expect a freshman to play the type of minutes with the type of production Ballard has gotten from Thompson.

This is Fletcher Long, congratulating both teams for tremendous seasons, while reporting for Kentucky Prep Gridiron, reminding you to PLAY THROUGH THE WHISTLE!