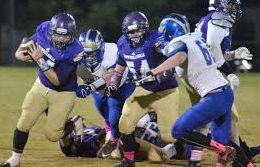 Fulton City is turning over its football fortunes to a Head Coach who is re-plowing, plowed field. We have before outlined that Dain Gregory was on the Cooper staff at Ballard Memorial which took Ballard to three straight trips into the second round of the KHSAA playoffs for that program’s only time in its history. Then, Coach Gregory got the unenviable job of attempting to build a Logan County Football program which had struggled for many years both prior to his coming and since he left. Coach Gregory took Logan County to the playoffs in 2012. Since his departure, they haven’t returned. While we are at it, Logan County, under Gregory’s direction, beat cross-town power Russellville High School in 2011. You may add that to the list of things Logan County hasn’t done since Gregory left. I am sure the Fulton, Kentucky Field of Dreams movie would change the oft-quoted, well known line of If you build it he will come to You better go get Dain Gregory if you want it built.

The legendary NFL Head Coach of the Cincinnati Bengals, Paul Brown, famously said one time You can learn a line from a win and a book from a defeat. Assuming that is true, the Bulldogs have lost enough to construct a Library of Congress in Fulton City Kentucky. Gregory inherits a team in Fulton Citywho has won all of 7 games since 2010. Yes, sports fans, that is 7-66 over the last 7 seasons. What does Dane Gregory say to this? No sweat!

Here’s to what I want everyone in the Bulldog program to cling. The great Lou Holtz once said, It’s not the load that breaks you down, it’s how you carry it. You have hired the right man to show you how the load has to be carried. If you carry it the right way, you not only won’t break down, you just might find you’ve been built. Remember Fulton City Ballers…listen to Coach Gregory and, oh yeah, I almost forgot…PLAY THROUGH THE WHISTLE!