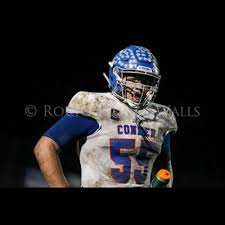 Conner High School is in a tiny town named Hebron, Kentucky in Boone County. Hebron is most known as being the home to The Cincinnati/Northern Kentucky International Airport serving Cincinnati and the Trinity-State area (Ohio-Kentucky-Indiana). Its Football team, known as the Cougars, has done well under Head Coach, James Trosper, who has led Conner to 64 wins in the previous 9 seasons playing in Kentucky’s largest classification of football (6A).

Hebron, Kentucky is getting pretty well known for being a rich breeding ground for Division I, college football talent. Remember Peyton Van Horn, the 6’2″ 220 defensive lineman who tallied 12 and 1/2 sacks for the Cougars on his way to being defensive player of the year in 2016 and making the all-district  and all-conference teams before signing with the Colonels? Well the Cougars have developed another stud and this one’s name is also Peyton. The surname is Knippenberg this time as opposed to Van Horn.

Peyton is a 6’4″ 305 lb. offensive/defensive lineman at Conner High School. At Kentucky Prep Gridiron, we believe Knippenberg’s future at the college level is at Offensive Guard. Peyton squats over 400 pounds and runs the 40 yard dash in 5.1 seconds. Folks, for 305 pounds, that is motoring. Peyton has a really good frame, one to which some good weight replacement would net a down-hill, drive blocking, machine with the speed to trap and pull. Peyton is a kid with the speed, agility and motor to block multiple levels. Peyton, in his high school film, has shown

he is able to release into the 2nd and 3rd levels, in the run game, and block back 7 defenders trying to come up and stuff rushing plays.

Peyton has pledged himself to join Van Horn at EKU, where the two Boone County boys will fully demonstrate the mettle and toughness for which Conner High School and Hebron, Kentucky men are known. Peyton is the 29th highest rated Kentucky prospect in its 2018 Class according to 247Sports.com, but, as we have before discussed, linemen are harder to evaluate than skills so a big’s ranking means very little to me. What does mean everything to me is the fact both Mark Elder, Head Coach at EKU, and Terry Heffernan, who counts Offensive line among his coaching duties, are both in consensus Peyton Knippenberg can play at the Division I level. Good enough for me fans, that’s why they make the big bucks.