Every now and again the good people at KPGFootball will let me stray a bit from our normal coverage to cover extraordinary athletes who fall outside our usual area. It is permitted especially if it helps to accentuate a theme which advances one of the principal reasons we exist in the first place. This on-line magazine was started because a former sports editor, in one of the areas where we principally operate, refused to report on a story about 7 kids, from one town, making the Tennessee-Kentucky Future Stars Classic. His reason was that the newspaper employing him didn’t cover middle school athletes. This, of course, was total malarky because they were frequently covering Country Club Swimming, as it regularly garnered the headline of its sports’ page, but I digress. So to say accentuating outstanding middle schoolers is a central theme of the publication is understated. Hell, its the reason we even exist.

I have been telling readers since coming on line there is a big difference between a state or national level, middle school football player versus the middle school player at the local, area junior high. Not every middle school player, down at Joe Blow Junior High, is a Ty Simpson from Martin, Tennessee; an Owen LeMaster from Johnson County, Kentucky; a JuWaun Northington, a Kiyaunta Goodwin, or a Brandon Hobbs from Louisville, Kentucky. Dallan Hayden, Ty Simpson, and Kiyaunta Goodwin types are not fetching FBS, power 5 offers for nothing. 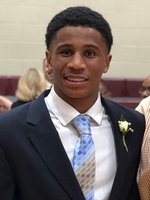 I have enjoyed the distinct privilege of getting to coach on a staff at the Bret Cooper Junior All-American game in Dallas, Texas the past two years. I have coached some extraordinary players and worked with coaches so much smarter than I they had to wonder why in the world I was even there. I am afraid I have no answer for them. However, one of the kids I enjoyed watching play for the East All-American team, this past December, was Saint George‘s Dallan Hayden. Dallan Hayden is the son of one of Tennessee’s all-time running backs who would have gone early in the first round of the NFL draft, when he came out, had he not entered the draft injured. That aside, Aaron Hayden played years in the NFL and had a productive pro career before ultimately getting into coaching and assuming the slot, coaching running backs, at the prestigious Christian Brothers High School in Memphis, Tennessee. Dallan played defensive back for us in Dallas, Texas as an 8th grader and Tennessee has offered him as an athlete.

Dallan has exploded on the scene this summer and has grown quite a bit too. Hayden is a rangy 5-10.5 inches tall and weighs 165 pounds as he was measured and weighed just this past June 23rd at the University of Tennessee’s prospect camp. Hayden ran a 4.6 second, 40 yard dash, which by the way is smoking for a high school DB, much less one who is not quite in high school yet, and turned in a pro-agility shuttle (5-10-5) of 4.38 seconds demonstrating both exception spacial quickness and change of direction speed. Dallan had a standing broad jump of 8 feet and a 27 inch vertical and excelled sufficiently during the one on ones that the University of Tennessee thought it advisable to offer this Class of 2022 standout in the hopes its being first would have some impact when it came time to choose amongst what will certainly be many suitors.

There are several reasons I wrote this article and departed, somewhat, from covering Kentucky and contiguous area players. First, Dallan is an exceptional student, athlete, and citizen. Therefore, under our stated publishing criteria, we have deemed him worthy of being featured, regardless of where he resides. Secondly, I believe in the Bret Cooper Game (and love me some Bret Cooper) because the game awards All-American distinction not to just great athletes but to athletes who both compete and exceed academically as well as athletically. Finally, because I want it to inspire Kentucky’s own national level, middle school and underclassmen prep players, of which Kentucky has plenty, to keep working, grinding, and doing the right things. It really is a marathon, not a sprint. Sure, Ty Simpson, Dallan Hayden, and Kiyaunta Goodwin (a 6-8, 370 pound, Class of 2022 OT from Louisville that several power 5 teams, including Tennessee, have also offered) have fetched early offers, but it really doesn’t matter when you get offered…just that you get offered. Keep working men, your day is right on the horizon.