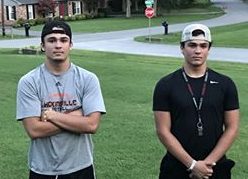 There aren’t too many Tennessee football fans in Hopkinsville, Kentucky in spite of its proximity to the Tennessee state line. I was reared in Hopkinsville and attended HHS and can remember when the Longs and the Flynns were pretty much the only two Tennessee fans in Hopkinsville. As a graduate of the University of Tennessee (don’t be hating), I am proud to say the Lackeys also cheer for the Big Orange. Pretty odd that they should be fans of that team because the two of them, whom I still have extreme difficulty telling apart, remind me of the two Mike Cofers who graduated from UT in 1981. Now the Mike Cofers weren’t related. As a matter of fact, the two of them weren’t even the same race, as one was black and the other white. Both of them were starters on the 1981 Volunteer football team. One was a TE and the other a DE/OLB. Tennessee fans came up with nicknames to tell them apart. The DE, who played in the NFL for many years was nicknamed Stop and the TE was nicknamed GO.

Might not be a bad idea to do something along those lines regarding the Lackey boys. Last year, the two of them, both Class of 2020 prospects, were linebackers. This year, HHS will continue to rep Connor Lackey on defense at Linebacker and Hayden will likely be first team at TE on offense and play some Anchor on Hoptown’s down four. Maybe we can call Connor, Stop and Hayden, Go. One thing is for sure, Jeff Sisk, the play by play guy at WHOP, which broadcasts Tiger Football games, will be calling both names frequently so he needs to come up with something.

Connor Stop Lackey played more extensively in 2017, though both of the Lackeys were awarded varsity letters at the season’s conclusion. Both of the Lackeys have had tremendous off seasons in the weight room and both of them are different players than they were as sophomores. Connor, in 2017, registered 49 tackles but will have a much more active impact on the defense’s second level this year we, at KPGFootball, predict. Why, you ask? Well, much like his brother who we will detail here in a moment, because stronger, explosive, more powerful football players tend to prosper in a game which calls for strength, explosion, and power. Connor is 6-0 and weighs 195 pounds. He bench presses 235 pounds, power cleans 250, and pulls (deadlift) 465. His front squat, which basically measures a player’s ability to coil and uncoil, working low to high, is 365 pounds. One reason Connor‘s front squat would be worthy of mention is his being deployed at LB. The front squat requires the same bringing of the hips called upon to tackle and explode through a ball carrier.

Hayden Go Lackey has been moved to the offensive side of the ball, though he will still play defensively too, where Lackey will be aligned at TE. During Seven’s season, Hayden was an oft deployed and utilized weapon in the down field throw game working the middle of the field down the seam. Hayden has reliable and sure hands and moves well providing an exploitable matchup for the Tigers when Hayden is being defended by an opposing linebacker. Hayden bench presses 225 pounds, also front squats 365 pounds and pulls 465 like his brother. Go Lackey power cleans 260 pounds, which is quite fantastic for a 6-0, 205 pounder. With Hayden we featured the power clean as it measures explosiveness, particularly vertically, important for TEs, whom are often called upon to climb the stairs and go get the football, across the middle, at the ball’s highest point.

Both of these guys are quality young men who are well-mannered, hard working, and very strong, explosive, quick-twitch athletes. The Lackeys are both excellent football players, with good frames capable of holding quite a bit more heft. Both of the Lackeys have noses for the football and demonstrate a willingness to find the ball and claim it. Woe be unto them who get in their way. KPGFootball looks for monster seasons out of both of these guys as they are 2020 guys whose stock will rise considerably in 2018 and beyond.