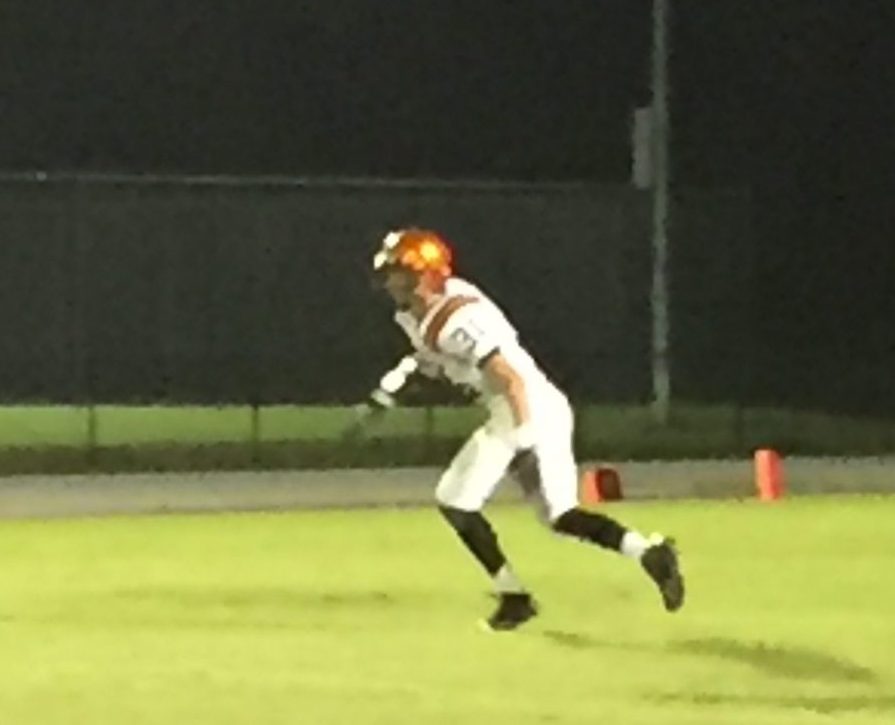 Coach Clayton has referred to his present HHS Varsity Football Team as the best JV team in Kentucky. With 2020 kids dotting the starting line-up on both sides of the ball, and a few 2021 kids either starting or contributing, well…you get the point. The Tigers went on the road against a very good South Warren team, quarterbacked much of the night by a kid (Gavin Spurrier) whose grandfather won the Heisman Trophy (Steve Spurrier) and led up front by a Notre Dame commitment (Jacob Lacey, 2019). For much of the night the young Tigers acquitted itself well for much of the game in spite of, by my count, ten drops by the receiving corps, 7 fumbled QB/Center exchanges, an obviously stripped fumble denied HHS, and a TD scored off a botched placement which was caught in the end zone with nearly SW’s entire OL downfield. That’s football, particularly on the road sometimes.

If you are searching for a defensive bright spot from this Friday’s game, I thought I might offer the play of Connor Lackey. Connor is a 6’1″ 180 sophomore who entered the night second team but will certainly find the starting lineup, one would guess, after his performance on Friday, which, by the way, was stellar. Connor is rangy and has long arms making him able to cover underneath and he is fearless when he gets downhill either blitzing or defending the opponent’s run game. Connor is also a tireless and hard worker in the weight room, when he isn’t playing baseball, as he is a multi-sport athlete at HHS. I can’t comment on what kind of baseball prospect he is, I am just not qualified to say, but he is a next level football prospect, for sure, if he continues to fill out his slim frame and matures. Connor has good speed, which will get better as he gets stronger and more explosive in Coach Dowland’s strength & conditioning program. Though I can’t give you an accurate timed 40 or shuttle on Lackey, I can assure you he looks faster on the field than I am willing to wager he is on the clock. This is because he has really good football instinct, meaning he makes sure and quick reads and takes good pursuit angles to the ball way more often than he doesn’t. Linebacker isn’t an easy position in the 4-3, for a young football player, and, as a sophomore, he is certainly young for the starting lineup at that position, but Connor played it very well Friday night under the lights. One of the finest compliments which can be said about any athlete is Connor isn’t just a practice hero, he is a gamer. Playing on a very big stage Friday night, one had to like what they saw from Lackey.

I do want to mention another player in the defensive backfield and that is EJ Austin (2021). Man-o-man is this kid good. EJ was all over the field, covered well at different levels on the back 4, broke up several SW pass attempts, and was clearly denied a strip by a quick whistle by the officiating crew which, ultimately resulted in a SW TD several plays later. HHS is a young team and when it makes plays, like stripping and recovering a ball from a receiver whose progress had not been stopped, it needs to reap some benefit, particularly when the young team is opening in a hostile environment. I also want to mention the fine play of CB, JeVon Leavell, 2020, who, like Lackey, is a sophomore. Leavell got over the top of some vertical attempts and came up and made plays in the running game. Leavell might have been thrown to the wolves as a freshman in last year’s back 4 as an early starter. After being burned a few times, his confidence appeared, last year, to have taken a beating. His confidence, this year, appears to be just fine and his play Friday night was worthy of some ink.

In the final analysis, HHS had a lot of youth in the lineup which played well in spots. HHS also made a ton of mistakes in both the run and passing games together with having a difficult time with the snap. Mike Sherman, former high school, college, and NFL football HC, has before commented that it’s pretty common for a college football team to show the greatest improvement between the first and second game. I believe the same is true of High School football teams too and I don’t believe Coach Sherman meant to limit that to college. It came out that way only because of the venue during which it was said being on Fox Sports SouthWest, while on the Aggie Coach’s Show. We can only hope that level of improvement kicks in, this week, because the Tigers have a very tough challenge coming up in the Jerry Claiborne Bowl in a Mayfield High School football team fresh off a slaughter of Union City’s Golden Tornado, in Union City, Tennessee.