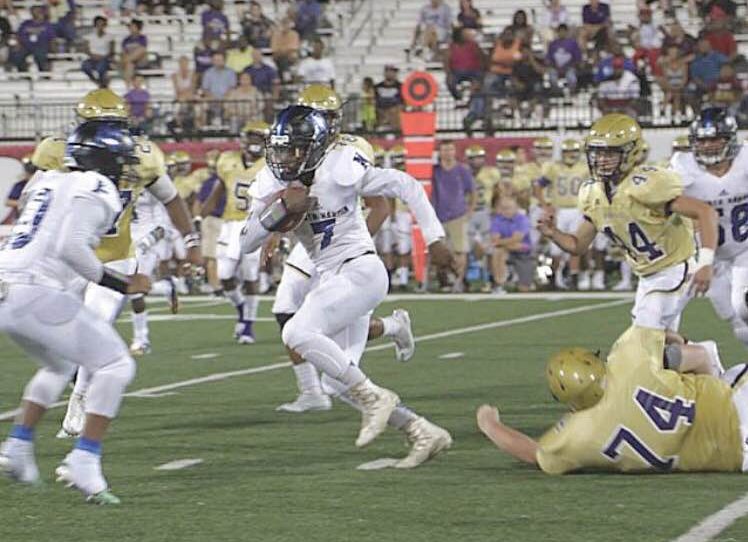 This article is about a player who possesses a skill set that is just terrific. I have before labeled him one of my Fantastic Four. The Fantastic Four are the four rising freshmen in Kentucky I believe to be the best overall in the 2021 class (LaVell Wright, William Long, Justice Thompson, and Austin Gough). I might add that all four of the Fantastic Four started his first game for his HS Varsity team and played either every snap on his side of the ball or every meaningful snap this past weekend. Kind of sounds like we know a little something around Kentucky Prep Gridiron, huh? It should also be noted all four of the above identified played this weekend for a historically prestigious High School program (respectively, North Hardin, HHS, Louisville Ballard, and Owensboro Senior High).

LaVell ran a laser-timed 4.71 this summer at a combine in Cincinnati, Ohio, which is blistering speed for a High School RB who is a frosh. Truthfully, a 4.71 laser timed forty is approximately a 4.56-4.62 on a stopwatch so that is fast regardless of classification. To put it in perspective, at the 2016 NFL Combine, Glen Gronkowski from Kansas State ran the same 4.71 laser timed 40 as LaVell Wright and Gronkowski wasn’t the slowest 40 of the RBs at the Combine that year either. For that matter, Peyton Barber, from Auburn, ran a laser timed 4.64 and he is on the Tampa Bay active roster this moment.

LeVell is 6’2″ and weighed 180 this summer when he played RB for Team Kentucky Future Stars and was a staple for Kentucky’s FBU National Finals Tournament Team (Team KY FBU finished 6th Nationally) this summer at the same position. I have had a running debate with LaVell as to where he would play in HS. I believed with his length, strength, explosiveness, and speed he would end up a WR/OLB combo, Iron Man, player in HS. North Hardin High School has elected to start LaVell at RB and, after all, they are the professionals. I will stand by my prediction LaVell, who isn’t nearly done growing judging by his wing-span and shoe size, will end up in the 6’4″ and over range. It’s not impossible to play RB at that height, Brandon Jacobs was around that height and played well both at Auburn and professionally, but the conventional wisdom is that anything over 6’2″ is thought to be too tall for the position.

I would additionally add that I wanted to include LaVell in my Plug-In Player series but I was unable to hear from either LaVell or anyone at North Hardin so, unable to corroborate my suspicion he would start as a freshman, I excluded him rather than go to press with something unsubstantiated. Now, North Hardin fell this weekend to defending 5A State Champion Bowling Green High School at Harbaugh Stadium on the campus of WKU 42-7. Before any of you think that means North Hardin isn’t any good, you should know two things. 1. Bowling Green beat Male 36-6 in a tune-up scrimmage before the North Hardin Game and Male is loaded and very highly regarded. 2. Both Louisville Trinity and Bowling Green are by far the best two High School football teams in the Commonwealth. If you are a future North Hardin opponent, I am not sure how much stock you should put in BGHS stomping North Hardin. That certainly doesn’t mean your going to have an easy time with either North Hardin or Mr. Wright.

This is Fletcher Long reporting for Kentucky Prep Gridiron hoping you enjoy the eclipse and remember to PLAY THROUGH THE WHISTLE!