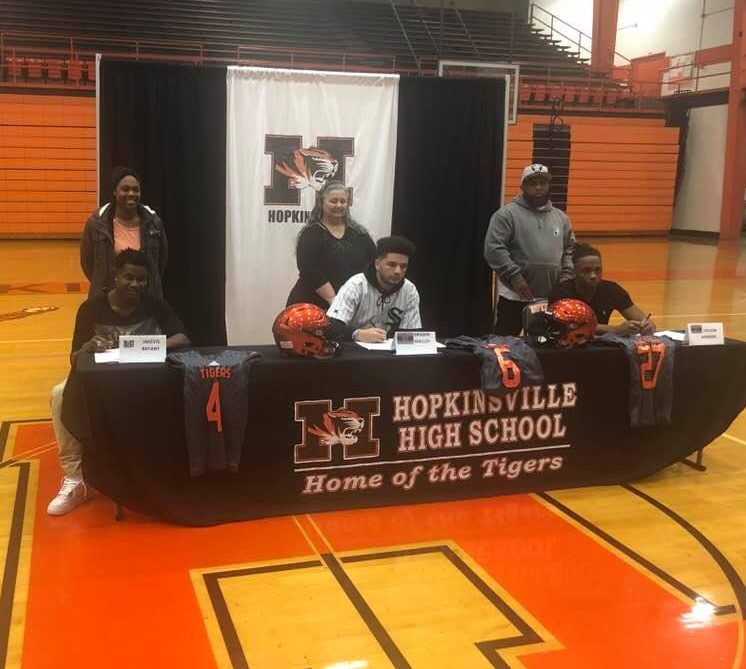 It was a big day all over the Commonwealth of Kentucky as prospects signed National Letters of Intent, pledging themselves to college football programs. Now all across Western Kentucky we had players who pledged to FBS, Power 5, programs all the way to NAIA schools and virtually every level in between. We, here at Kentucky Prep Gridiron want to iterate that we don’t care at what level you pledged; you’re a Saturday player now who is such an accomplished high school athlete that some school was willing to pay either all or some of your tuition just for the privilege of your playing for them. That is one Hell of an accomplishment and something of which to be very proud. If your not proud of that, then we will just be proud on your behalf. I am sure your parents are quite proud, particularly of being either partly or completely relieved of paying the tuition at the school where you will play.

We had players we have featured on Kentucky Prep Gridiron sign today with everyone from Purdue to Western Kentucky to Sewanee, a.k.a. The University of the South. One way I look at it, with a son playing high school football myself, is the ones who signed with schools like Sewanee, Georgetown, Centre, and the like, did even better than the kids who signed at good, old State University. Do you have any idea what the yearly tuition at Sewanee or Centre is? A football scholarship to Sewanee, having 5 to play 4, is worth between $200,000 and $250,000. Look up the school’s tuition with whom your loved one signed today and multiply it by either 5, should they red-shirt, or four, provided they don’t, and that is what the scholarship is worth to his family, at a minimum. You know they do feed and house these kids, in addition to providing them books and materials and paying the tuition. It’s quite expensive, and any athlete who can get a substantial part of that provided simply because they are good at their chosen sport should be celebrated. I can promise you this, if my son were to be offered by a prestigious school like Sewanee, for example, I would be thrilled and would become the biggest Tiger fan in history!

Anyway, lots of kids who signed with smaller schools today are still big time football players. Regardless of where they signed, many of them would have excelled at even higher levels of college football than the level at which they inked today. That is why the NFL is composed of players who played in the FCS (7.7%), D-2 (4.4%), and even D-3 (0.4%), in addition to the ones who came from FBS level schools. Big schools miss on guys, FCS misses on guys, D-II, D-III, and NAIA schools all miss on guys and each of those levels also polish diamonds in the rough who go on to make handsome livings in the sport, either coaching or playing, here or abroad. So, congratulations from Kentucky Prep Gridiron to all of the newly minted Saturday players. You joined today a very select group. Very few Friday nighters ever get the opportunity to strap on their helmets on Saturday. Enjoy it, make the most of your opportunity, and remember to PLAY THROUGH THE WHISTLE!