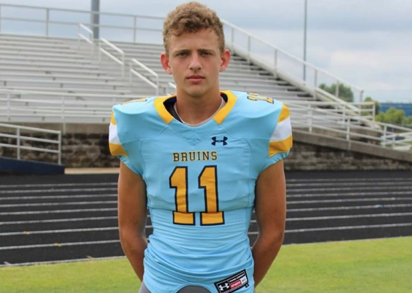 Central Hardin is a Class 6A, District 2 team which generally advances deep into the playoffs. Coach Tim Mattingly‘s charges, last season, advanced as far as the State Semis before losing 49-3 to eventual State Champion, Louisville Trinity. The Bruins finished the year 10-4, with one of the losses being a 15-0 blanking at the hands of Class 2A, CAL. The loss to CAL, we mention merely to further KPGFootball‘s position there is excellent football played on all levels and at all of the 6 classifications in Kentucky, these days. Teams in Class 2A like Danville, Mayfield, CAL, and DeSales have amply demonstrated they can play with anybody. Their ability to give any team in Kentucky a game, and even beat said team, is demonstrated yearly and transcends any competing team’s classification or how many male students a team may have walking the hallways.

Now the Bruins, if we are being totally honest, have to make strides in its passing game proficiency and, while we haven’t talked to Coach Mattingly, we are willing to wager no one is more aware of this than he. In Central Hardin, you have a football team at Kentucky’s largest classification which was a way too one-dimensional on offense. Just last year, it’s 6-6 inch, 192 pound QB was the team’s second leading rusher but more on that later. The Bruins gained around 3,300 yards from scrimmage but only threw the ball, as a team, for around 750 yards in 14 games. Leading passer, Jacob Hobbs, Class of 2019, managed a meager stat line, passing the football, of 44 completions in 113 attempts for a completion percentage of .389. Hobbs threw for only 564 yards and 7 TDs while throwing 7 interceptions over 14 games.

Enter Class of 2020’s Chase Elmore into the equation. Now, Chase didn’t get any statistical credit for either attempting or completing a single pass in a single varsity game a year ago. We have heard Chase is a more traditional type of QB, with his drop-back, set up, and delivery than the run-first Hobbs. Regardless, someone doggedly insists on listing Elmore’s primarily position as “QB” on every online site listing him as a football player. Chase is a three-sport athlete at Central Hardin, also starting on the Bruins’ baseball and basketball teams, in addition to what he did on defense for Central Hardin last season. It should be noted, Elmore is an outfielder on the baseball team, a position, other than pitcher, where teams deploy players with the strongest arms.

On defense for the Bruins, Chase Elmore, who is listed as a free safety, or, for the unsophisticated, the QB of the back four, particularly shone a season ago. Elmore led the team in interceptions with 4, returning the four a combined 66 yards, and scooped up his lone fumble recovery, rambling 16 yards before, ultimately, being tackled. Elmore had 55 stops a year ago for a defense where few carriers were getting past the second line. So, what does all of this mean? Well, we think it means this QB, who is likely to possess a better arm than last year’s first teamer, was just too good of an athlete to keep off the field in 2017. It isn’t unheard of to put an up-and-comer QB where a lot of future star QBs get shelved until it is their time to take the reins…at free safety. Hobbs‘ play over his junior season, throwing the football was poor enough to make us wonder if he can hold onto the job this upcoming season, provided the Bruins are going to attempt to diversify its offensive attack. If Coach Mattingly views the QB as a sometime thrower but, primarily, just a running back whom catches the snap, then Hobbs is the guy in 2018, as the 6-6 and 192 pounder gained 823 yards in 148 carries (5.561 yards per carry) and 12 rushing TDs. Should the Bruins be seeking to balance out the offense, offsetting a fine running attack with the legitimate and consistent threat of the forward pass, then…just maybe…