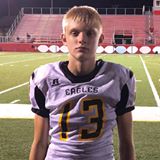 There are counties where the kids play the same offensive and defensive systems as the middle and high school teams from 2nd grade through 12th grade. There are high schools who get to mine for talent among players who enter ninth grade already knowing the high school’s terminology, alignments, signals, cadence, everything. Two local examples of this are Princeton and Mayfield. By the time young Princeton football players enroll in 7th grade and come out for middle school football, that young man has been running the 7th grade’s offensive and defense since he started playing football in 2nd grade. Incidentally, what the 7th and 8th grade teams run at Caldwell County Middle School is exactly what the high school runs. I told you all that to tell you Johnson County is not one of those scenarios. The middle school is 7th and 8th grade only, and the feeder schools and programs, which I hear are not much count, don’t run the same schemes, use the same terminology, and often run only God knows what type of schemes. Johnson County kids don’t really learn to play together until they get to 7th grade and, in a lot of cities and counties around Kentucky, they start out several years behind. That is why it is impressive when Johnson County is able to do what it has done to this point in 2018.

Johnson County came out the gate 1-3 in its first 4 games before rebounding to win 5 of its next 7 to get to advance to Saturday’s game at Lexington Bryan Station for the 7th grade, Region 3 Championship against traditional middle school powerhouse, Elkhorn. So while the Eagles enter the weekend with an uninspiring 6-5 record, one shouldn’t put too much stock in the record in evaluating the merit of this team. Johnson County beat North Pulaski 36-14 during the regular season (a team which won the 7th grade State Championship just two years ago) and beat a very good Lexington Catholic team, 38-22, in the Regional Semi-finals. In addition, it would only be fair to point out that Johnson County played 4, 8th grade, teams over the course of this season, going 1-3, but were still coming out of those four games both battle hardened and tougher for the experience. In games played against 7th grade competition, Johnson County went 5-2.

The Eagles feature a solid backfield anchored by QB, Jacob Grimm, a long and lanky player with a high football IQ, and align both Zack McCoart and Ryan Rice at the halfback posts. KPGFootball has it on good authority that McCoart, while not very big, is pound for pound as hard to get to the ground as any runner in the area. Leading the half-backs into the hole is fullback Cole Campbell. Cole has some heft and the quickness to be relied upon frequently to convert late down, short yardage situations.

At tight-end, Johnson County features one of the more versatile and skilled players in the 2024 class. Carter Conley attended the KPGFootball All-State Mountain Football Combine this past summer and put on quite an impressive performance. At the time, Carter was 5-8 and weighed 125 pounds and we evaluated him as at QB. He was really fast, clipping a hand-timed 40 yard dash in the low 4.6s and short shuttled in 4.8 seconds, meaning his straight-line speed was ahead of his spacial quickness and change of direction speed but that isn’t uncommon in young players. After all, a 4.8 second, short-shuttle, for a seventh grader is phenomenal. Since performing and impressing us at our combine in the mountains, Carter has grown to 5-9 (and has a tall man’s frame, so he’s only getting bigger), has gained  a good 10 pounds, and has been deployed at TE for the most part. If you are wondering why we called him versatile, it is because he has also played halfback, quarterback, place-kicker, and punter during the season.

So here it is…Elkhorn will be facing the very best 6-5, 7th grade football team, anywhere in Kentucky this Saturday at Bryan Station High School. Elkhorn will be playing a battle hardened, tough, team which has played an unbelievably tough schedule. Elhorn will be playing a team which it can’t intimidate and which won’t be afraid as the opponent, chances are, has played bigger, faster, tougher, and even stronger teams to date. So, who will win Saturday afternoon? Well, KPGFootball has to like the Eagles’ chances to continue its improbable and even, dare we say, incredible run through the Region 3 bracket.