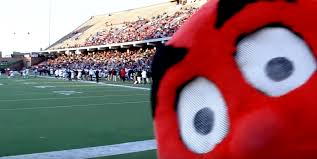 Things are heating up on the recruiting trail for Caldwell County’s Oliver Parker. Oliver is a WR prospect, in the Class of 2019, who is also able to play FS. Parker, who has been timed at 4.6 seconds in the 40 yard dash at several college prospect camps he attended leading up to this, his senior year, is listed at 6-2 and weighs 165 pounds. On the year, he has 39 receptions, playing in 8 of his teams’ 9 games, for 772 receiving yards, and 10 TD receptions. Oliver averages 96.5 receiving yards, per game, and averages nearly 20 yards per reception. Oliver is his teams’ leading scorer, having scored 60 of the teams’ 194 points on the season, with one game remaining before the 7-2 Tigers embark on its playoff journey. Perhaps the most important thing one can say about Parker is his Tigers have won 6 straight contests, after opening the year 1-2, and much of the teams’ heating up can be attributed to Oliver’s play.

So this weekend the boys in Bowling Green, Kentucky have invited Oliver up to take in a game and enjoy the atmosphere and facilities which comprise Western Kentucky Hilltopper football. Parker’s father, Ken, played at WKU himself, so I am sure this invitation was both coveted and thrilling to the Parker household. Parker continues to be pursued heavily by the Murray State University Racers, in addition to numerous other suitors, and Murray State is enjoying a very fine year, indeed. The Racers stand atop the OVC standings, at present, with an overall 3-3 mark, but a perfect 3-0 record within the conference, with wins over UTMartin, Eastern Illinois, and Tennessee State University.

We have no idea whether Big Red will pull the trigger and offer this multi-sport high school star who has also excelled on the Diamond during his high school career playing for the Tigers. We do think it would be a very fine idea as the courtship for this senior, who caught 46 passes for 777 yards with 8 receiving TDs as a junior, is only going to gain suitors as the season and playoffs move along to its ultimate conclusion. Word to the wise Western Kentucky, KPGFootball would strongly discourage slow-walking an offer to this particular prospect. Receivers like this don’t grow on trees.