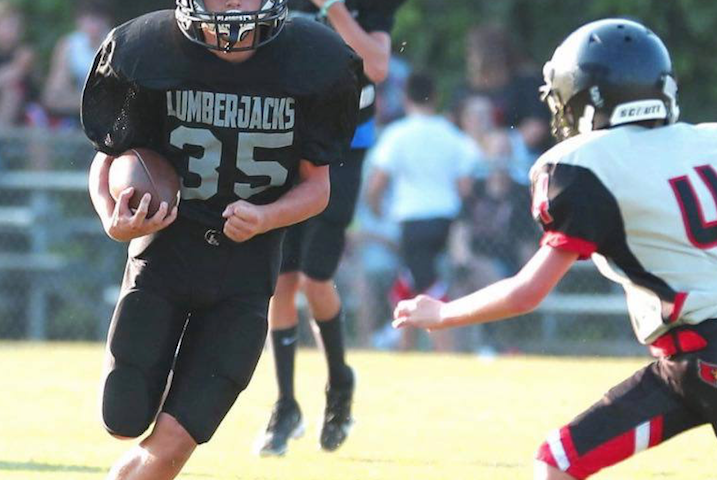 Before anyone looks askance at this article written about a sixth-grader, let us remind you we cut our teeth (so the speak) covering the middle school game. While middle school football starts (most places) with the seventh grade, as it does in Breathitt, there are still many middle schools around the commonwealth which count sixth-graders among their number.

Therefore, featuring a kid this age isn’t too far detached from our standard subject matter. Not all sixth-graders are equal.

We have learned since Kentucky Future Stars Football incorporated a sixth-grade classic to its 7th and 8th-grade counterparts that there are some fine players across Kentucky at this level of competition. Eli Thomas is one of those.

First of all, were one looking for prime-timers at the sixth-grade level, the locker room of the Northfork Lumberjacks would be as good a place to begin one’s search as anywhere. The Lumberjacks are among the more formidable teams at this level of play across the entire commonwealth.

Eli Thomas is 5-6, weighs around 130-pounds. Thomas has had at least one, 200-yard rushing performance among the first battery of games played so far this young season.

Thomas isn’t playing against just the best in his county either. The Northfork Lumberjacks travel around and play different 6th-grade teams and all-star teams around the eastern part of Kentucky.

We talked to Northfork’s head coach, Glen Gross, about just one of his star players. He told KPGFootball, “Eli’s a superior athlete who has lots growth potential as a football player. Eli is only going to keep getting better as long as he continues to put in the work.”

We asked Coach Gross what he meant by “superior athlete.” He told us, “Well, this past Spring (when 12), Thomas jumped on a 46-inch box. We’ve got high-school, varsity football players, across Kentucky, who can’t do that. Many of them are deployed at skill positions at all classifications of competition.”

Now, we don’t have a running speed for you. We can show you clips of Thomas running plenty fast enough to leave an opponent’s back third of its defense in the dust; but, in the end, our guess as to his speed would be speculative.

We can say this, vertical explosion relates directly with running speed. This is a correlation we have covered and annotated in prior articles many times.

We will not again cite those self same statistics. Sooner or later you guys are supposed to be learning something.

Suffice it to say, there is no way this prospect doesn’t have upper-level, elite running speed and athleticism for a kid his age. His production on the field bears that out just as evidently as his Herculean feats of athleticism and vertical explosion.

If I were Ricco Hughes, Director of Future Stars Football, and I was going to be fielding a 6th-grade team to beat Tennessee’s best this coming summer, I might be writing down this name. Then again, that’s just me…