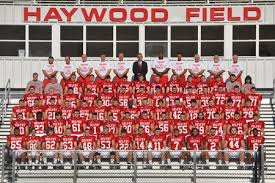 Well guys we are steaming along toward the opener for the teams whom didn’t tee it up for week zero and one team we are anxious to see are the Pond Creekers from Haywood Field, a.k.a. Belfry High School. Like last year, Belfry opens with a team from West Virginia whom happens to be the Class 3A, preseason, ranked 3rd in its state, also known as the Huntington High School Highlanders. Now before we get too much into this article, I should point out that, while both Belfry and Huntington are Class 3A teams in their respective states (yes, I know Kentucky is a Commonwealth), Huntington High School has an enrollment of approximately 1,658 students while the enrollment at Belfry High School is under 700 students. In other words, Class 3A encompasses much larger high schools in West Virginia, where there are only three classifications, than it does in Kentucky, where there are six. We are going to break down the respective teams and KPGFootball will pick a winner at the end…

First for the visiting Highlanders…

Let’s get this fact right out of the way, the Highlanders beat Belfry in the Pike County Bowl a year ago 45-34. The Highlanders went on to finish out the season 12-1, losing to Spring Valley in the playoffs. Spring Valley, in beating Huntington 10-7 to advance in November avenged an earlier loss to the Highlanders it had suffered way back on September 1, 2017 in Huntington 14-0. Huntington finished the year the 4th ranked team in all of West Virginia and the 3rd highest regarded team in its classification. Preseason, the Highlanders, in 2018, are ranked by MaxPreps, the 3rd highest regarded football team in West Virginia. This will be a test, make no mistake about it.

Huntington, like Belfry is big and physical both offensively and defensively. The Highlanders have a hulking tackle prospect, behind whom to operate offensively, in Max Howell. Howell is 6-4 and weighs in at 290 pounds and is regarded the 13th best overall prospect in West Virginia for football. Howell has been clocked in the 40 yard dash at 5 seconds flat, which is absolutely flying, and projects in college to play either tackle or guard. The Thundering Herd have already offered the 2019 prospect and there are other suitors in hot pursuit to include the Louisville Cardinals. Joining Howell, up front for the Highlanders is a fine prospect at guard and one at center. Christian Hanna is one of the top center prospects in West Virginia, and a favorite to garner All-State consideration; and, at the guard post, the Highlanders boast another potential All-Stater in Noah Smith. Both Hanna and Smith are in the 6-0 to 6-1 range, height-wise, and both weigh between 265-270 pounds.

The Highlanders have an accomplished QB who is an excellent passer and very effective in the Spread’s read-option game, whether he gives or pulls it, in Tay Blackwell. Blackwell is a Class of 2020 prospect who doubles at free safety and is 6-2 and weighs in at around 185 pounds. One of the more dangerous weapons in the ground game for the Highlanders may be its blocking H or flex-back, Bryce Damous. Damous is 6-3 and weighs 230 pounds, and also plays linebacker. With Bryce, aligned 2 yards back and 2 yards off the outside shoulder of the tackle, Damous gets heavily involved in the ground game as a lead blocker. He is fast, physical, and a real down-hill headhunter.

On defense, the Highlanders are (like on offense) very big and physical, particularly at linebacker. Joining Damous in the linebacker corp is a MLB who may be the very best in West Virginia in defending the run up the middle. Brocton Blair, a.k.a. Coach, is 6-2 and weighs 225 pounds and patrols the middle with a penchant for attacking the line of scrimmage. Blair is a Class of 2020 prospect who is garnering quite a lot of FBS and FCS level interest. On defense, the Highlanders are a 4-3 defense, with the linebackers to play from out of that alignment very well. The Belfry offensive line getting second level to get some hats on these linebackers will be a very important match-up.

For the home-standing Pirates…

Well, what can one say about a team whose chances to win a State Football Championship in Kentucky’s Class 3A are very good this year. Belfry goes into this game ranked number 2 in Kentucky’s Class 3A by about every significant ranking publication. Belfry’s chances in any ball game, or in any year, have to start with the fact Belfry is coached by, maybe, the best high school football coach to ever stride a sideline in this Commonwealth or any other. It is hard to bet against any team coached by the legend Phillip Haywood, Kentucky’s all-time wins leader and the only Kentucky coach to have won a National Coach of the Year Award. Haywood led Belfry to four consecutive State Championships ending in 2016. Belfry went 11-2 and got smacked by Louisville Central in the State Quarters, 60-20, so you know that left a bad taste in every Pirates’ mouth, particularly Phillip Haywood.

Belfry graduated only eleven seniors from off the 11-2 team, but one of the eleven seniors was RB Taveon Hunter who set the All-time Kentucky, yards-per-carry, rushing record last season gaining 1,285 yards in only 78 carries with 15 rushing TDs. Coach Haywood also has to replace departing senior Derek Wellman who gained 1014 yards with 18 rushing TDs. It’s good thing Coach Haywood has some able and willing candidates to fill the shoes of the departed. Belfry will turn to rising junior, named Peyton Hensley, to carry the load with sophomore Isaac Dixon a candidate to shoulder some of the burden.

Hensley gained close to 800 yards from scrimmage last year, as a sophomore, with 11 rushing TDs and QB Kevin Browning also returns after throwing for 730 yards, through the air, as a junior, with 11 passing TDs and running for another 425 yards with 8 TDs scored over land. Paving the way for the backfield, up-front for the Pirates, returns KPG All-Stater, Ethan Wolford, who is the best center in Kentucky together with Kentucky’s best guard in 2019, Dagen Rash. Both Wolford and Rash anchor what is an elite offensive front, perhaps in a class all its own in Kentucky in any classification, and each of them holds numerous offers to play college football with offers continuing to be extended to both. Rash and Wolford are two of the toughest kids in the entire Commonwealth and comprise the bulk of the regard and esteem in which Haywood’s Hogs are held across Kentucky. Watch the play of Austin Lawson at the tackle slot as the 6-2 and 290 pound manster is drawing a lot of interest. Against the 4-3 defense, and with Coach Blair roaming the middle, Kentucky’s best center (Wolford) or best guard (Rash), which ever one finds himself uncovered, has got to get second level and get a hat on Brocton Blair for the Pirates to run the football where they make their living, if you know what I mean.

The Defense returns leading tackler Austin Fields (112 total tackles) to go along with KPG All-Staters, Grayson Cook (LB) and Ben Bentley (Safety). In addition to last year’s stable of super sophomores, Belfry boasted, two of the best freshmen in the Commonwealth of Kentucky in KPG All-Staters, Seth Mounts (OLB) and Isaac Dixon, who are both now sophomores, and who both played starring roles for Belfry while only freshmen. Isaac Dixon may end up being the fastest player in the game being timed under 4.5 seconds in the 40 at almost every combine he attended this past summer. The bad news for the Highlanders is that neither of them are freshmen any longer.

The Belfry back four against the Highlander’s down the field throw game is a huge matchup. Owing to the type of offense Belfry runs, which doesn’t throw the football very much at all, it will be difficult for the Belfry scout team to even simulate the offense the Highlanders will trot out Friday night. That fact probably accounts for how the Highlanders scored 45 points on Belfry in last season’s Pike County Bowl. Belfry gave up 272 points last year in 13 games or about 20 a night with Huntington High and Louisville Central scoring 105 of the 272, or over 38% of the entire season total, in just two of those games. Belfry only allowed 15.2 points a night against the other eleven teams. Haywood’s Hogs against the Highlander linebackers is another key matchup if Belfry wants to run the football anywhere near the way it is accustomed. The 4-3 is designed to keep fronts occupied with the down four to allow the linebackers to flow freely to the play. It is a fine alignment if a team has stud linebackers. It is not so effective if the linebacker play is subpar. The Highlanders have studs at the linebacker positions, particularly up the middle and the Pirates can’t afford to allow those guys to flow freely to the ball carrier.

If the name of this publication were West Virginia Prep Football we would probably be taking the Highlanders here. However, this game is pretty close to a toss-up and the Belfry Pirates are a tad-bit closer to a home crowd in Pike County than the boys from Huntington, though not by much. This game will be both tightly contested and, probably a back and forth affair. If Belfry wins here, there can be no question of the legitimacy of its claim to rival Boyle County for the top slot in Kentucky’s 3A classification.