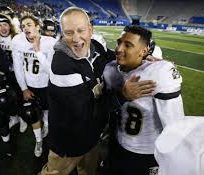 I and told it is Mid-term election season and that is not a season we cover here on KPGFootball. However, candidates (we hear) have either just run a primary or are busy raising funds for a not too far off general election. I can give you a candidacy which would be bound to win, especially around the Boyle County Rebel Football program and community, and it fits darn well on a ball-cap. How about #EZ for PrEZ! Yeah, he’ll get our vote too.

The EZ I am referencing, of course, is Boyle County‘s former super sophomore (Class of 2020) and now jarring junior, linebacker/tight-end Ezarious Roller. Roller is a 5-11 215 pound mostly linebacker who, when it isn’t football season, throws both the discus and the shot in the Field portion of Track & Field. One of the most important attributes of a linebacker is to find ball, smash ball-carrier. Good ole’ EZ appeared particularly adept at both of those responsibilities over the course of the Rebels, 14-1 State 3A Football Championship season. Roller led the defense with 108 tackles a season ago, with 62 of the tackles being of the solo variety. As a matter of fact, Roller was the only Rebel defender to eclipse the triple-digit tackles’ mark over the course of the season. This was some defense too as the Rebel stop-squad, in 15 football games, allowed opponents 199 points (13.24 per game). The defense, led by Roller, was particularly tough against the run as it allowed only 1,054 yards all season long, which is approximately 70 yards a contest. We have always maintained at KPGFootball that championship teams can run the ball and stop the run. These Rebels gained right at 267 yards a night running the ball while allowing only 70. Boyle scored 45.6 points a night while allowing 13.24. Point in case!

We were unable to find where Boyle had credited EZ with a single reception even though his offensive position is listed as TE. Now the TE in Boyle’s offense may be of the sixth offensive lineman variety, or the stats keeper screwed the pooch. We were able to find the picture to the left of this paragraph on his Hudl page. I can tell you this, trying to tackle EZ in the open field by any player stationed along either the 2nd or 3rd levels of the defense gives me a headache. It is just a nightmare. Now, back to defense. It is hard to get into the spotlight when you have to compete for media attention with teammates the likes of Reed Lanter, Landon Bartleson, and Reese Smith. I will be the first to admit I missed Ezarious on my AFI-KPG Sophomore All-State Football team selected at the end of last season and, from the looks of his production, his omission was in error. I can assure you, as a newly minted Associated Press All-State voter, KPGFootball will be following this guy this upcoming season. We have no intention of overlooking this player twice. If he has a junior year like his sophomore year statistically…